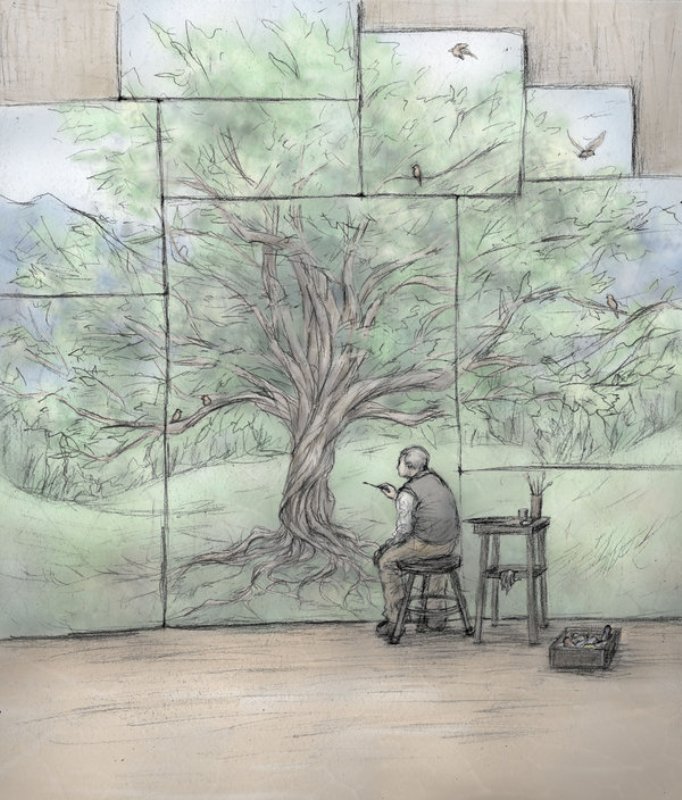 There was once a little artist who had lived in a society that did not value art. He had a long journey to make and did not want to go. But he could not get out of it. When would the journey begin and end? Where would it take him? He had no idea.

Suddenly one particular picture had come to his mind. It had begun with a leaf caught in the wind, and it became a tree; and the tree grew, giving birth to numerous branches and deep roots. He wanted to paint this great tree before he embarked upon the long journey. He started working on his canvas with obsessive attention to detail, trying to make every leaf uniquely beautiful.

He lost interest in all his other artworks when the great tree became a single vast embodiment of his vision. He laid out a canvas so huge that he needed a ladder to reach all four corners.

The artist worked hard but he didn't get much done. No matter how hard he worked, very little actually showed up on the canvas. In addition, he was constantly distracted by many mundane chores and duties that prevented him from giving the work his undivided attention. His 'kind heart' also turns out to be a double-edged sword. He was doing many things for his neighbour to the point that he could not focus on his masterpiece.

One night he sensed that the journey he had put off was about to begin. When he knew that he had to leave the house and the canvas behind, he began to weep. How could this be? His work was still incomplete.

After his departure, people who acquired his house noticed only one beautiful leaf on the crumbling canvas. It was put in the Town Museum but only a few eyes noticed it. One day the Museum was burnt down. The artist and his painting were soon forgotten in his country. What a sad story, isn't it?

But the good news is that the story does not end there.

The artist found himself on a train toward the mountains of the heavenly afterlife. It didn't take long until the steam engine gave a whistle, the brakes were put on and the train stopped. There was no station, no signboard but only green embankment. He went outside in spring sunshine and looked up in complete amazement. Before him stood the tree, his tree, fully finished and bursting with vitality; its leaves opening, its branches growing and bending in the wind just like he had envisioned.

His work was incomplete and forgotten in his old country. But in his new country, which is in fact the real world, he found that his tree was part of the true reality that would last forever.

Perhaps you may already know this short story from J. R. R. Tolkien titled "Leaf by Niggle". I can often identify strongly with Niggle. What about you? Almost everyone wants to make a difference in this life but all will come to naught in the end unless there is a true reality beyond this world.

After three years of writing articles, this is my last article for Christian Today Australia. A new chapter of life awaits me in a distant land. Recounting the above story has given me a striking allegory of my own work and writing endeavours over the years, and to an extent, my life as a whole.

How did I manage to write 33 articles over the past three years? Some articles were written quickly and hastily, others carefully and thoughtfully. Some were written on board a ship, others at an Internet cafÃ© during the mission trip. Often I had no time or too tired to write. Sometimes I couldn't think of any topic to write about with the deadline fast approaching. Some articles were No. 1 most popular on Christian Today while others quietly appeared and disappeared. I have also been distracted and discouraged by life's unexpected twists and turns during all this time.

But I managed to turn in all my articles by the deadline (including this one) every month. How did I do it? God's grace enabled me. I thank God for giving me the privilege to write on this space, while shaping and moulding me in various ways in the process.

In this world, our work will always fall short in some way, shape or form. Often they will be fruitless and frustrating even on our best days. But we can take comfort in the fact that our work in this life is not the final word.

Eventually the tree that we seek - be it peace, justice, mercy, beauty, joy or love – will come to fruition in a true reality beyond this world. In his book "Every Good Endeavor", Tim Keller commented: "If you know all this, you won't be despondent because you can get only a leaf or two out in this life. You will work with satisfaction and joy. You will not be puffed up by success or devastated by setbacks."

So let us not become weary in doing good, for at the proper time we will reap a harvest if we do not give up (Galatians 6 verse 9). When we reach our true home, the deepest longing of our heart will finally be fulfilled.

Therefore, my dear brothers and sisters, stand firm. Let nothing move you. Always give yourselves fully to the work of the Lord, because you know that your labour in the Lord is not in vain (1 Corinthians 15 verse 58).

Finally, I'd like to take this opportunity to thank Alison Barkley for introducing me to Press Service International, Dr. Mark Tronson for ongoing support and pastoral care, David Chang and Natalie Chu for help in editing my articles over the years. Thank you also to all who have been reading my articles.

The end… but this is only the beginning of the next chapter.