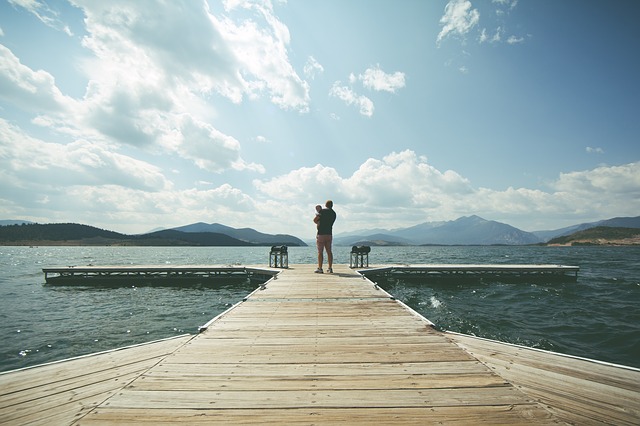 With Father’s day just around the corner I have been inspired to write about God, the perfect father. My earthly dad has always tried his best to be present and loving towards my brothers and I. His fathering has reflected God’s fathering of us.

However, I know, earthly fathers aren’t always the best. Fathers can make mistakes and hurt us. They can abandon, neglect or portray. Sometimes, fathers aren’t fathers at all. They run away before their child is even born.

Who do children turn to then? They can turn to God.

What an astronomic blessing that the God of the universe is father to those who turn to him. He has been involved in our creation and adoption! He has said, “Let the little children come to me for theirs is the Kingdom” (Matthew chapter 19, verse 14). He has said, COME. He has welcomed us in! My earthly father has always had this same attitude. An attitude of welcoming his children into his lap. Some other characteristics of God’s fathering follow.

A Father is present

Imagine a dad that never was never around. A dad that missed birthday parties and school performances. A dad that never called you up when you or himself were away. Our father God is in fact the opposite. Instead he says, Never will I leave you; never will I forsake you (Hebrews chapter 13, verse 5). He will be there for you even if everyone else forsakes you.

See what kind of love the Father has given to us, that we should be called children of God; and so we are. (1 John chapter 3, verse 1).

Here the greatest love is stated. He loved us in such a peculiar way that we see his greatest manifestation of love for us in that he lets us be his children. We may join hands with our brother Christ, and by his merits sing with joyful tears that our Father has loved us enough to adopt us because of what our elder brother has done.

And whenever you stand praying, forgive, if you have anything against anyone, so that your Father also who is in heaven may forgive you your trespasses. (Matthew chapter 11, verse 25).  The greatest truth we can ever think of is the fact that we can be forgiven for any deed.

Our Father has forgiven his children and now they can forgive too. He has not only forgiven but set an example to us in how we interact with others. However, He doesn’t forgive us because we forgive others but rather his forgiveness comes to those who deny themselves and come to Christ in faith, letting go of their grudges and pride.

Imagine a dad that let you do whatever you want. For a little while it would be fun but after awhile it could lead to destructive consequences. As it says, For the

Lord diciples the one he loves, and chastises every son whom he receives (Hebrews chapter 12, verse 6).

We see that the Fatherly nature of God is not one of spoiling with gifts carelessly. Rather He is a Father that not only desires to show his love, but to correct his children of their errors. There will be times of great pain from God as he brings correction, just as an earthly father may bring pain in discipline, however through God’s correction his heart full of eternal love and wisdom is shown.

Come and run to the Father

The beauty of the gospel is not that everyone is God’s child but rather, God is a God of adoption. But to all who did receive him, who believed in his name, he gave the right to become children of God (John chapter 1, verse 12). This text not only states the fact that those who receive God have the right to become children, but states with Paul in Galatians about how one becomes a child of God, For in Christ Jesus you are all sons of God, through faith (Galatians chapter 3, verse 26). Thus, all it takes to be God’s child is to say ‘Yes, God, I believe you and have faith you’ll be the best father I could ever dream of having.’

I hope this next Father’s day, wherever your Dad is or what he is like, that you would celebrate your Dad in heaven. If you’ve never done so then I’d encourage you to follow his call to ‘come’ now.

Renee Jenner resides in Sydney, Australia and is currently in her third year of studying Social Work. She is the first born of home-base missionary parents whose ministry has made a huge impression on her heart. She always writes from the soul to the soul, desiring to encourage readers to enjoy God, relax in His goodness and spread His love to the utmost parts of the earth. She loves a good cuppa with a deep, thoughtful conversation. You can find her other writings at renee.jenner.wordpress.com

Renee Jenner’s previous articles can be viewed at