Football is over (for AFL and NRL League) so its time to lament and work out why things happened the way they did. For some this leads to conspiracy theories. Sport has so many.

Why has former Test Opener Ed Cowan been dropped from the NSW team? How come in both their recent Premierships Collingwood never travelled to Perth? Did the American Mob poison Far Lap? How come after breaking the salary cap Melbourne Storm keeps winning? How does Fremantle think their song is anything but shockingly bad? How come the Wallabies cannot win like they used to? Why did the Socceroos have to play Honduras for a spot at the next world cup? How come the Saudi World Cup is being played in a city that has not even been built yet?

Lets try answer them. Ed Cowan is a dour, sensible player from Tasmania who has gone to NSW to play. Maybe a younger local player is better for the future of  NSW cricket? However, Cowan was top runs scorer last season. Keep on moving. You are either for Collingwood or against them. Its the way they like it. And, the AFL draw has less rounds than it takes for each team to play each other twice in a season. It is supposed to even out after two seasons but it never does. Keep going. Yes, Far Lap was probably taken out by some nefarious crew, we don't know and like Jimmy Hoffa we will never know. And another. Melbourne Storm recruits well and has been able to keep three of the best players in the ARL. They also share grounds with Collingwood, 'nuff said.

Sigh! Even I have sent Fremantle lyrics for an alternative song. W.A. band Eskimo Joe were asked to write a new one, it was not accepted and I have no clue why. With the ARU and the Wallabies, well they get the short end of the stick these days. Soccer has supplanted both Rugby's for second most popular football code in Australia. Rugby Union is also not doing themselves any favours with the Western Force debacle. There is a whole generation of immigrants from South Africa in W.A. that may be lost to the ARU.

For the Socceroos Ange Postecoglou is trying to change things in Australian Futboll, which is not hard. It's coaching suicide. Innovation is often looked on as dangerous and risky. Australia's best assets are in midfield and our aging talisman Tim Cahill is, well, aging. However the defensive finds of late have been promising and playing Honduras is not a backward step. Just look at the USA and Italy who did not make it to the World Cup. They got knocked out by Jamaica and Sweden respectively. And the World Cup being played in a city that has not been built yet, well that's just FIFA. They went for the money and that was that.

Now lets get onto the real conspiracy theory. If Melbourne or St. Kilda make it to, or win, the next Grand Final the AFL has some real trouble. No, seriously. Look at the last two premiership teams. Footscray had not won since Ted Whitten was playing for them. Richmond have not been close for decades. Now both win in succeeding years. Does anyone else not see the pattern? 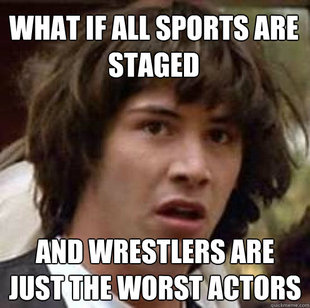 Of course you don't. Because it is only tentatively there. Like all good conspiracy theories there is a level of truth in it. There are enough facts to entertain the skeptical. For those who want an easy explanation. That somewhere, there is a secret knowledge that can bring true enlightenment to the puzzling world around us. Where it can be explained how Donald Trump became President. How a certain tatooed player was able to the Brownlow. Ans how Richmond won again the Crows. Easy answers, like conspiracy theories delude and enable us to believe that we are smarter than others. Because we have the good oil. The true wisdom.

The real proof is not in the prediction and the passionate longing for a result that did not go your way. Real proof is in the actions of those involved. Listen to the words of Damian Hardwick the Richmond coach. Hear where he accepts responsibility for past failure. Change came first from him realising where he went wrong. Listen to the pundits as they elucidate on the changes made by the Richmond team leaders. How both Jack Riewoldt and Trent Cotchin decided to put team success ahead of personal achievements. How did they beat the Adelaide Crows, a team who were the best the whole season? Well, as the trading of Jake Lever has revealed things were not all wine a roses at the Crows. If you accept the hearsay of the Richmond players at half time, it seems the Crows players were already sniping at each other on field. Team cohesion is incredibly important, especially on Grand Final day. A house divided against itself cannot stand.

You cannot build the future or entertain the past on that which is not built on something solid. Solidity is proved by stable and responsible actions. This is why we are told and why we sing “they will know we are Christians, by our love”. Screaming denials and accusations into the wind will only spark fear and worse. The world will do what the world will do. We are called to love first. Accept this and the path ahead requires no secret wisdom at all.

Check out the Australian First Class stats for 2016-17 season.

Check out “Battle of the Codes” from the Guardian website.

Read more about Lusail the Quatari city not yet built.

Phillip Hall is a post-graduate student at the University of Divinity and not so long suffering Fremantle Fan. The lyrics he wrote for a new Fremantle Song were quite good and if you ask him he will sing it for you.