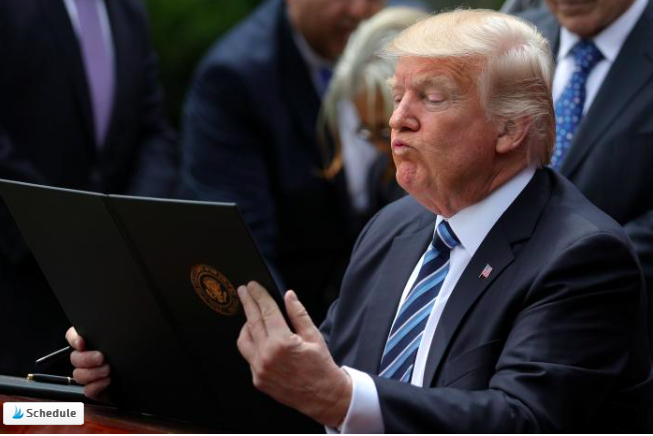 U.S. President Donald Trump prepares to sign the Executive Order on Promoting Free Speech and Religious Liberty during the National Day of Prayer event at the Rose Garden of the White House in Washington D.C., U.S., May 4, 2017. (Reuters/Carlos Barria)

‘A Spell to Bind Donald Trump’ was an event promoted throughout America and beyond. February 24, March 26, April 24 and May 23 were specific dates set apart, and they attracted 10,000 followers on the dedicated Facebook page.

No matter how we regard Donald Trump, cursing him is not for us. He has galvanized opinion like few before him, but his declaration of faith and his choice of Christian team members provoked wild and passionate attacks. Celebrities called for his assassination. Furious, unrestrained street scenes and riots unleashed.

Even the Australian Christian Lobby had a comment.  “Donald Trump’s surprise win is further evidence of a growing global backlash against a political class which is increasingly disconnected from the concerns of ordinary people,” said ACL’s Lyle Shelton.

The occult activity is of particular interest. Christian missionary and successful author Dr Ed Murphy suggests we need to be more alert. “Effective ministry in our day demands that we must recover the knowledge and experience of the spirit world that the early church possessed. We must relearn the forgotten art of spiritual warfare,” he said.  (The Handbook of Spiritual Warfare, Dr Ed Murphy, Thomas Nelson Publishers)

God will take care of it, is a phrase often repeated in Christian circles. A careful reading of the Bible clearly indicates God will do His part, but He expects Christians to actively partner with Him in resisting the enemy. “Finally, be strong in the Lord and in his mighty power. Put on the full armor of God, so that you can take your stand against the devil’s schemes. For our struggle is not against flesh and blood, but against the rulers, against the authorities, against the powers of this dark world and against the spiritual forces of evil in the heavenly realms.”

The Apostle Paul wrote these powerful words to the Church in Ephesus (Ephesians chapter 6, verses 10-12) The warfare he described is in ‘the heavenly realm.’ It is spiritual! By ignoring the occult assault, did we actually ignore our designated role? It is easy to focus on the mundane but be ineffective in the fight!  Chinese theologian Watchman Nee wrote: “A spiritual life is one of spiritual usefulness because it is lived to mount assault upon assault against God’s spiritual enemies.

We ought to be zealous for God, relentlessly attacking that enemy and never allowing this most useful spirit of ours to sink into passivity.” (The Spiritual Man, Watchman Nee, Christian Fellowship Publishers, Inc)

Watchman Nee triumphed over serious persecution. He was imprisoned for his faith and spent the last twenty years of his life in prison. While incarcerated he died and was cremated. A note was found in his cell. “Christ is the Son of God who died for the redemption of sinners and resurrected after three days. This is the greatest truth of the universe. I die because of my belief in Jesus Christ – Watchman Nee.” He triumphed in the spirit despite the evil he faced in the flesh.

Every strategy of the enemy leads to deception, bondage and destruction. Jesus put it this way: “The thief comes only to steal and kill and destroy. I have come that they may have life, and have it to the full.” (John chapter 10, verse 10)

Occult and witchcraft activities are evil and an abomination to God. We have our share. The 2011 Australian census shows 40,000 people identified as pagan, Wicca or witchcraft.

Jesus defeated the Devil when He rose from the dead. His death and resurrection declared a glorious triumph, which is ours to enjoy. The Bible says Jesus made an ‘open show’ of the Devil and dealt with him ‘once and for all.’ The only way Satan gains influence now, is when people allow him. Humans choose to employ an unemployed Devil. In the New Testament we learn of his ambitions:  ruling over a kingdom (Matthew chapter 12, verse 24) and blinding the minds of unbelievers (2 Corinthians chapter 4, verse 4) to name two. We can observe these activities headlined every day.

There is another activity on our to-do list. “I urge, then, first of all, that requests, prayers, intercession and thanksgiving be made for everyone – for kings and all those in authority, that we may live peaceful and quiet lives in all godliness and holiness. This is good, and pleases God our Savior.” (1 Timothy chapter 2, verses 1-3) President Trump is on that list.

Throughout my life, author and bible teacher Francis Frangipane has been an inspiration.  I hope these words of his are appropriate: “God cannot lay claim upon a city before He lays claim on our hearts. His plan is a man, anointed and raised up to serve the purposes of God in his generation.” (The River of Life, Francis Frangipane, Whitaker House).

Pastor Paula White, pastor at New Destiny Christian Centre in Apopka, Florida, led Trump to Christ. She was one of 40 religious leaders who met the Don at a private prayer service in New York. In a Christian Post interview Pastor White said: “My observation and experience is that faith has been instrumental in his life. Like many Christians, his understanding of the Bible has grown and is growing. So, while I can’t give you a specific chapter and verse, I know of his love for the Word of God.”

We are called to bring light into the darkness. Maybe we should let politicians know we will be praying for them.