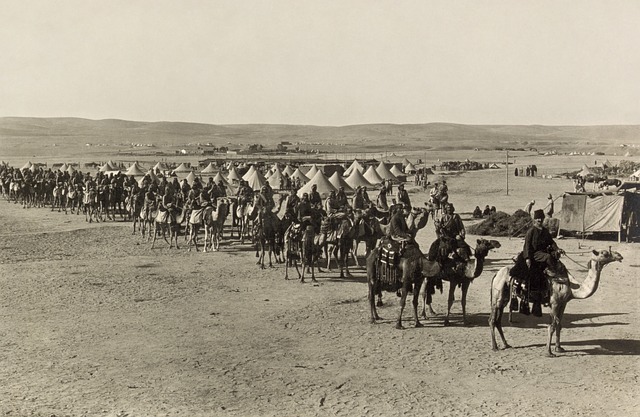 It was dawn 31st October 1917. The Australian Light Horse were ready, behind a ridge 6 kilometres south-east of Beersheba. They started at a trot, rising to a gallop across a gently sloping field. Deep trenches were scattered to catch unsuspecting horse and rider.

As I walked the length of that historic arena, my heart filled with admiration and respect for our gallant men.

“The horses were shying aside from the shell bursts. A thin haze of smoke and dust began to rise, but the three lines of horses moved steadily forward. The first half-mile was the worst. After that, much of the fire seemed to be going over our heads. As we learned later, the Turks had ranged all their weapons on us but the sight of us Australians coming from an entirely unexpected direction and bearing down on them was demoralizing, and they had forgotten to bring their sights down as we advanced.” - One hundred years ago Australian Light Horseman Jim Henderson made that comment in his diary.

Last February Prime Minister Netanyahu met at Admiralty House. When he responded to the warm welcome by the Australian Prime Minister Malcolm Turnbull, Netanyahu said, “I’m honoured to be the first Israeli Prime Minister to officially visit Australia, God it has been a long time coming. It celebrates really, 100 years of friendship of Australia to the Jewish people and their state.”

“The charge of the Light Horse Brigade. This is not only etched in your memory; it is etched in our memory. In fact, we are going to celebrate this and I’ve invited you and your delegation to mark this extraordinary event, the last successful cavalry charge in history that liberated Beersheba. We will celebrate this event in Be’er Sheva, in Israel. We would like you to know that when you come there, you come as a great friend of our people and our civilization,” said Prime Minister Netanyahu.

Israel is preparing to celebrate Beersheba and the Australian Light Horse. Not only did those horseback heroes ride courageously into Beersheba, their chivalry charged right on into political deliberations of the British War Cabinet. For most of 1917 British leaders had been talking Palestine. They worked through numerous drafts in an attempt to solve the Jew-Arab crisis expeditiously. World War 1 posed critical possibilities. If Britain and their allies were triumphant what rewards might follow?

In 1915 Britain promised Hussein, the Sharif of Mecca, support for an independent Arab kingdom in return for his willingness to mount an Arab revolt against the Ottomans, an ally of Germany in the war. The Sharif of Mecca assumed their promise included Palestine. But in 1916 Britain made a secret deal with France. Under what was called the Sykes-Picot agreement Palestine (a British military designation) was to be placed under international control.

The British Prime Minister David Lloyd George, as early as 1916, openly supported Zionism, a movement led in Britain by Chaim Weizman. The British War Cabinet guided by the Prime Minister created the Jewish Legion, the only armed Jewish force to fight in Palestine for 2000 years.

Several British political leaders, including Balfour, believed in the righteousness of Zionism. They also hoped to gain Zionist support in the United States and in Russia where the anti-semitic Czar and his government had been overthrown because of vigorous Jewish activity. There was passionate debate in the British Parliament not least of all with anti-Zionist Jews who feared repercussions against Jews in Europe, America and the Ottoman Empire. The final approving came with support from France, the United States and Italy (including the Vatican) In the midst of these tensions came the encouraging news from Beersheba.

The document addressed to Lord Rothschild was dated 2nd November, 1917 and said: "His Majesty's Government view with favour the establishment in Palestine of a national home for the Jewish people, and will use their best endeavours to facilitate the achievement of this object, it being clearly understood that nothing shall be done which may prejudice the civil and religious rights of existing non-Jewish communities in Palestine or the rights and political status enjoyed by Jews in any other country."

It was signed by the British Foreign Secretary Arthur James Balfour, although he was the signatory rather than the driving force. In 1917 the Balfour Declaration was just a statement of British policy. It was formally adopted at a meeting of victorious allied powers at San Remo, Italy in 1920.

In the UK Prime Minister Theresa May is exhorting her countrymen to show pride in the Balfour Declaration. Last March Arab activists called on the UK to apologise for it. They called for compensation suffered from what they called the ‘biggest social injustice of all time.’

“The Balfour Declaration may be the most extraordinary document produced by any government in world history,’ according to the Institute of Historical Review. Controversial, unique and the key to Jews from around the world returning to their promised land.

Christians are preparing to honour and celebrate the centenary. Referring to the Balfour Declaration, a group called the Balfour 100 say, ‘One other event took place on 31st October, 1917, which was key to the intentions in the Declaration. General Allenby won a key battle against the Turks and Germans for the desert town of Beersheva. Without a plan for the future, the victory at Beersheva would have been just another battle in a long and bloody war, footnote in history. The two events, occurring at the same time yet thousands of miles apart, was a sure sign that this was God bringing His plan for the Jewish people’s restoration to their land closer to fulfillment.” (See balfour100.org)