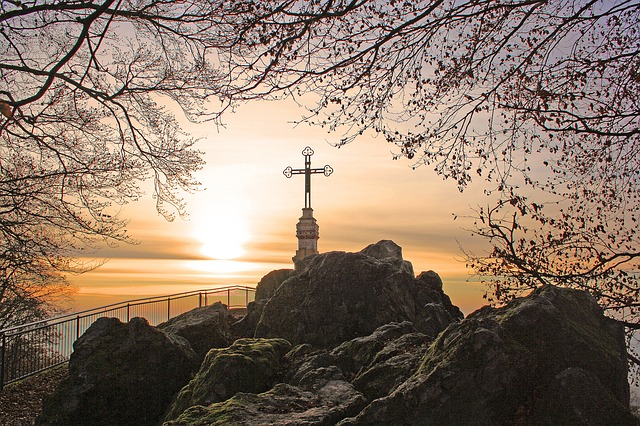 The Gospel of John was ‘perfumed with love’ according to Charles Spurgeon but we ‘hear the sound of war’ he said, when we get to John chapter 5. In that same chapter we read about a world to overcome.

The Apostle Paul mentioned ‘the schemes of the Devil.’ (Ephesians chapter 6, verse 11) So the unruly world today is not out of place.

Terrorism is a repetitive headline. The enemy seeks to spread fear and sadly that impacts millions. Symbolic locations are often targeted and the world is bombarded with graphic news coverage over and over again.

This illustration from James Hasting speaks volumes. “In his sermon “Fear,” Clarence E. MaCartney describes a peasant, driving into a European city, who was hailed by an aged woman. As they drove along, the peasant became alarmed as he learned his passenger was the plague, cholera. But she assured him that only ten people in the city would die of cholera. She even offered the peasant a dagger, saying he could slay her if more than ten died. But after they reached the city, more than a hundred perished. As the angry peasant drew the dagger to deal a death blow, the plague lifted her hand and protested, “Wait, I killed only ten. Fear killed the rest!” (Tan, P. L. (1996). Encyclopedia of 7700 Illustrations: Signs of the Times (p. 439). Garland, TX: Bible Communications, Inc.)

How can we unleash the Christian faith to a shaken world? In the midst of the Devil’s fear campaign, our faith is the overcoming factor. Years ago these words inspired me. “Down through the centuries, common and somewhat unskilled people have caused remarkable things to happen in their worlds when the passion of God invaded their beings. They took risks, overcame obstacles, and set standards that leave us breathless. This is the effort of the Spirit of God as it comes to the wearied person. To enliven us, to envision us, to empower us.” (Restoring Your Spiritual Passion, Gordon MacDonad, Nelson)

The healthy fear that stabilizes believers is ‘the fear of God.’ If we enjoy a healthy knowledge of God, we know He is infinitely more powerful than any challenge we face. A definition of faith says it is ‘a constant outlook of trust towards God.’ The nature of faith is our confidence in God and our intimate connection to Him through Jesus.

Faith is integral to our confrontation of evil in the world today. The Bible warns us Satan and his fallen angels comprise a well organized army. Ephesians 6 speaks about ‘the world rulers of darkness’ and ‘the spiritual forces of wickedness.’ (Ephesians chapter 6, verse 12) But Jesus Himself encourages us. “I have overcome the world,” He said.

Throughout the Bible we read about our circumstances in war-like terminology. “Yahweh goes forth like a mighty warrior; he stirs up zeal like a man of war. He raises the war cry, indeed he raises the battle shout; he prevails against his foes.” (Isaiah chapter 42, verse 13 – The Lexham English Bible) Matthew Henry suggests this verse looks forward to the Gospel. This is when Jesus dealt with the Devil. Our Lord went to the Cross, died and rose from the dead in glorious triumph. How amazing? The enemy can do his utmost but all that he has, fails!

Isaiah offers great encouragement. “When the enemy comes in like a flood, the Lord will lift a standard against him.” (Isaiah 59:19) I believe that standard is our faith. The enemy seeks to influence religion, morality, society, culture and politics.

The Isaiah warning continues. “Darkness shall cover the earth and gross darkness the people.” (Isaiah chapter 60) Sounds grim, but it is not the final answer. Over a hundred years ago someone asked a great general, “In a war, which army wins?” The general replied, ‘The one that advances.’ What a great word of encouragement? We have energy. We have confidence, because Jesus has us.

Derek Prince spoke constantly on the importance of spiritual warfare. He said, “To be effective in spiritual warfare, we must continually take the offensive with the weapons God has provided for us. It is not sufficient to merely defend ourselves and wait for the Lord to deliver us. We are an army of conquerors, and the nations of the world are ripe for a people who will conquer them with the Gospel of the Kingdom.” (On Experiencing God’s Power, Derek Prince, Whitaker House.”

So the next time a headline confronts you or an incident impacts your life, take time to pray. Tell the Lord how you feel. Pray for the victims, the grieving, the wounded and for the terrorists, that they might find salvation.

Recently in Egypt Coptic Christians stunned the nation. The Copts have suffered a history of persecution. Many died in a terrorist attack last Easter. The funeral service was televised and the Christians forgave the killers. The most popular talk show host in Egypt, Amr Adeeb struggled to describe his feelings. “The Copts of Egypt….” he said, “are made of steel.” Moslem hearts were touched and the love of Jesus passionately displayed.

And that my friends, is overcoming faith!