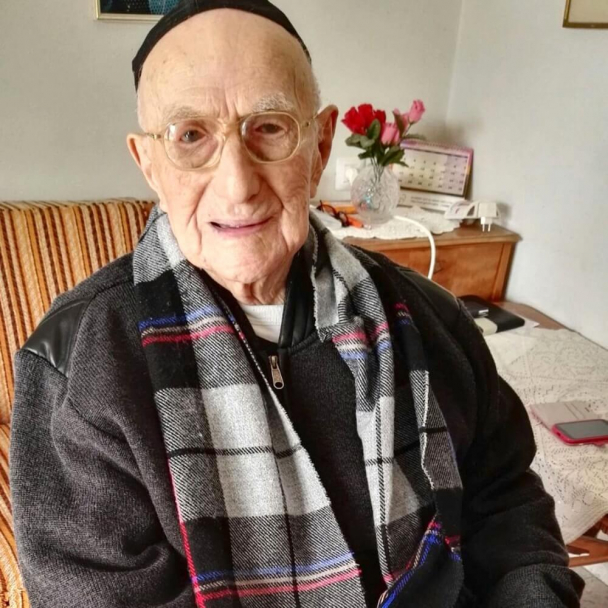 Yisrael Kristal was the milestone man. His parents died during World War One. His younger years were a struggle but the lessons he learned provided the survival instincts he needed for greater challenges yet to come.

Yisrael Kristal was born in Zarnow, Poland, in 1903.  What amazing changes he witnessed? In 1903 Ford produced its first car. The first transatlantic radio broadcast began between US and England. A new bicycle race, the Tour de France, was announced and the Wright brothers secured an airplane patent.

On August 15, 1903 the New Zealand All Blacks played the first rugby union test against the Australian Wallabies at the Sydney Cricket Ground (NZ won 22-3). 114 years ago!

In 1920 the 17 years old Kristal, moved to Lodz, Poland, to work in the family confectionary factory. He married Chaja Feige Frucht in 1928.

Lodz was occupied by the Germans from September, 1939. An edict was issued:  “The Jews were to wear on their right arm, directly under the armpit, with no regard to age or sex, a 10cm wide band of Jewish yellow colour as a special sign. Those who violate this order are liable to face the death penalty”. 14 November, 1939. A month later came the amendment: Jews were ordered to wear a yellow star of David on the chest and back instead of armbands.

“From the very beginning of the occupation the Nazi authorities used terror against the Jewish population. Jewish politicians, social activists and intellectuals were seized according to lists prepared in advance, and imprisoned in a concentration camp created without delay in Glaser’s factory in Radogoszcz. They were tortured and subsequently shot or transported to Dachau and Mauthausen concentration camps,” from the report by Holocaust Education & Archive Research Team (HEART)

The Warsaw and Lodz ghettos were infamous for starvation, overcrowding, exposure to cold and contagious diseases. The Kristals endured the Lodz Ghetto 1940-44. Their two sons died there.

Yisrael Kristal, aged 40, was taken to Auschwitz in 1944 and there, he lost his wife. Kristal survived slave labour, although he was transferred to other concentration camps.

At Auschwitz the front gate displays Arbeit Macht Frei (‘work will give you freedom’). While freedom for the Jews was never an option work was most definitely expected. There were three major sections. Auschwitz III was also known as Monoschwitz where the main function was the production of synthetic fuel and rubber. Much work required there!

In 1945 Germany was tottering but their madness in the concentration camps created deathtraps for so many. Anne Frank died of Typhus March, 1945.

Yisrael Kristal was liberated by Soviet soldiers, May 1945. He weighed 37kg (5 stones 11lbs). According to reports the grateful Kristal, rewarded the Soviets, by making sweets.

In 1950, with his second wife and their son, he emigrated to Israel, where he ran his new confectionary business until his retirement.

Ysrael Kristal enjoyed his bar mitzvah when he was 113. In Judaism Bar Mitzvah is bestowed upon a young man aged 13. (Bar is the Aramaic word for ‘son’ and mitzvah in Hebrew means ‘commandment.’ So at 13 the young man is recognized within Jewish culture as ‘a son of commandment.’)

For Yisrael Kristal his bar mitzvah came after a 100 years wait. He missed his scheduled event because of World War One.

Yisrael Kristal was officially recognized as the world’s oldest man, by the Guinness Book of Records in March, 2016.  He said he did not know the secret to long life but he believed it was ‘determined from above.’

"There have been smarter, stronger and better looking men than me who are no longer alive,” he said at the time. At that same event his daughter Shula Kuperastoch said, “His attitude to life is everything in moderation. He eats and sleeps moderately, and says that a person should always be in control of their own life and not have their life control them, as far as this is possible.”

It is challenging to think on her words.  ‘A person should always be in control of their own life and not have their life control them.” A profound outlook when you consider the trauma and tragedy Yirael Kristal experienced.

He died in August aged 113, survived by two children as well as grandchildren and great grand-children. When interviewed after his passing daughter Shula said she had ‘a great father.’ She added, "Despite all that he went through, and he lost the whole family in the Holocaust, he had a lot of optimism, and he always saw only light and good in everything."

This life of a man I never met, inspires me. As I ponder the perpetual tragedy and horror he experienced, I am overwhelmed and filled with wonder and admiration. There are many questions I would like to discuss with him. Consider the health fad diets of today,  the exercise gadgets on offer, the gymnasium routines and heart-rate monitors and general fitness gizmos. Yisrael Kristal had none of that! He had struggles, starvation, slave labour, rampant diseases all around him, tragedy after tragedy and yet he outlived so many.

I am in awe of his life. Kristal’s father was a religious man. He imparted important biblical principles to young Yisrael. I wonder how often they read Psalms together. “The righteous person may have many troubles, but the Lord delivers him from them all.” (Psalm chapter 34, verse 19)