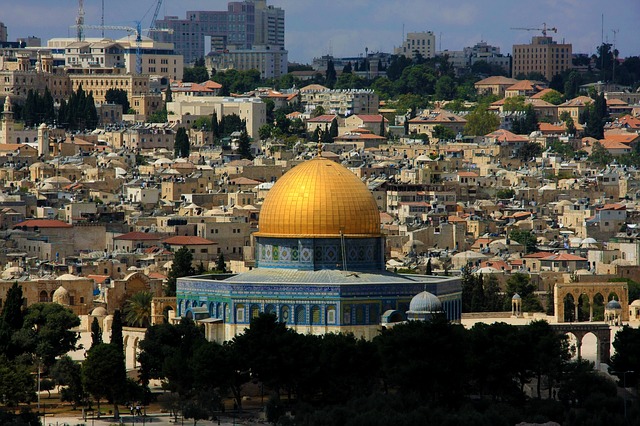 The 2017 Jerusalem Day celebrations are on. Hundreds of thousands will march and dance through the Damascus Gate enjoying their traditional Rikudgalim (flag dance). The celebration is colourful and even controversial.

This year civil courts had to rule on the route to be used by the celebrants. The new Jerusalem light rail system caused concern as it had taken over street locations once part of the event. This year marchers will not parade along the famous Jaffa Road but I think appropriately, they will use Haneviim (Prophets) Street. They may need a prophet or two very soon.

Jerusalem is at the centre of hurdles in the Middle East peace process. Palestinian Authority chairman Mahmoud Abbas made his position very clear at a White House meeting with President Trump. Abbas demanded a two state solution with East Jerusalem as the capital of the new Arab state.

U.S. President Donald Trump is scheduled to visit Jerusalem this month.(May). Speculators suggest he will make an announcement regarding the future of the US Embassy, currently located in Tel Aviv. During his election campaign the President said he would move the Embassy to Jerusalem, triggering fierce reaction. During a speech at an Israel Independence Day function, US Vice President Mike Pence said President Trump was giving ‘serious consideration’ to the move ‘as we speak.’ That was just weeks ago.

The fact that a nation with the might of the United States still balks over acknowledging Jerusalem, highlights the significance of the city and its identity.

Jerusalem envy is not new. I wonder if the flag-waving celebrants, as they proceed along Haneviim will think of the Prophet Zechariah. “I will make Jerusalem a stone weight for all the peoples” Zechariah wrote. (Zechariah chapter 12, verse 3)

Different Bible translations describe Jerusalem as ‘a burdensome stone’ or ‘a heavy stone’ which might indicate the city carries some weight.

Jerusalem was reunified after the 6-Day War. That battle started June 5, 1967. When we lived in Jerusalem I met with the Mayor of Beersheba, a true air force legend, Yaakov Turner. We were planning a visit by Australians to commemorate the Australian Light Horse. I had been given a high recommendation to the Mayor, by my Jewish friends.

As we entered his office, he rose, shook my hand and said he was thrilled to welcome an Australian VIP! I said, “Sir, it is my privilege to meet with a true Israel air force legend.” He smiled and with a twinkle in his eye said, “Ah, it was nothing. It only took six days!” That victory was seen as a miracle. Israel triumphed and in their eyes relived the David and Goliath victory.

On May 12 1968 the Israeli Government, decided to make the 28th of Iyar (Jewish calendar) the symbolic holiday, Jerusalem Day, a day that symbolizes the continued historical connection of the Jewish People to Jerusalem.

In the light of the most recent Jerusalem spat, the United Nations voted to adopt a resolution denying Israel’s rights to Jerusalem. The resolution declares that "all legislative and administrative measures and actions taken by Israel, the occupying Power, which have altered or purport to alter the character and status of the Holy City of Jerusalem, and in particular the “basic law” on Jerusalem, are null and void and must be rescinded forthwith."

Israel media outlet Arutz Sheva reported: “The resolution also condemns Israel for the military conflicts with the Hamas terrorist organization, which rules Gaza. 22 countries voted in favor of the resolution, compared to 10 which voted against it. 23 countries abstained.” Miri Regev, Israel Sports and Culture Minister is promoting a shutdown of UN facilities in Jerusalem.

Are the nations of the world represented by the United Nations? The heavy stone continues to carry weight.

I was looking for words to describe Jerusalem and came up with vibrant and volatile. I often sat in coffee shops in Jerusalem surrounded by coffee sipping neighbours with their kaleshnikovs at the ready. That was a new experience that we got used to very quickly.

Throughout biblical history Jerusalem has held an affectionate place in the hearts of the people. Psalm 122 is a hymn of praise to the city. “Pray for the peace of Jerusalem! May they be secure who loves you.” (Psalm chapter 122, verse 6) Those words, written thousands of years ago, remain relevant.

This is an excellent summary of our thoughts. “With the modern return of the Jews to Eretz Israel, Jerusalem took on a place of special significance. In the War of Independence (1948) the Jordanian forces captured the Old City of Jerusalem and Jews were forced to flee from the Jewish Quarter.

During the next 19 years the Jordanians destroyed much of the old quarter, including synagogues, and desecrating the Jewish cemetery on the Mount of Olives. Jews were unable to visit the ‘Western Wall.’ In the Six Day War (1967) the Israel Defence Forces retook East Jerusalem, including the Western Wall.” (The Encyclopedia of Jewish Life and Thought).

David wrote eloquently of his love for Jerusalem. “If I forget you, O Jerusalem, let my right hand forget its skill! Let my tongue stick to the roof of my mouth, if I do not remember you, if I do not set Jerusalem above my highest joy!” (Psalm chapter 137, verses 5 and 6)

Back to our flag dance along Prophet Street! I find it interesting bible commentators refer to Zechariah as ‘the prophet of hope’ who ‘looks at the future for the Jewish people during the coming centuries of pagan empire, and to the age of the Messiah.’ (The Teachers Commentary)

It is wonderful how God tips us off. As I pray for my friends in Jerusalem, I call to mind the words of Zechariah. I pray, I intercede and I believe. In the midst of the turmoil and debate there is a day of greater joy.

“And then on that day I will seek to destroy all the nations coming against Jerusalem. I will pour on the house of David and on the inhabitants of Jerusalem a spirit of grace and supplication, and they will look to me whom they pierced, and they shall mourn over him, as one wails over an only child, and they will grieve bitterly over him as one grieves bitterly over a firstborn.” (Zechariah chapter 12, verses 9 and 10)