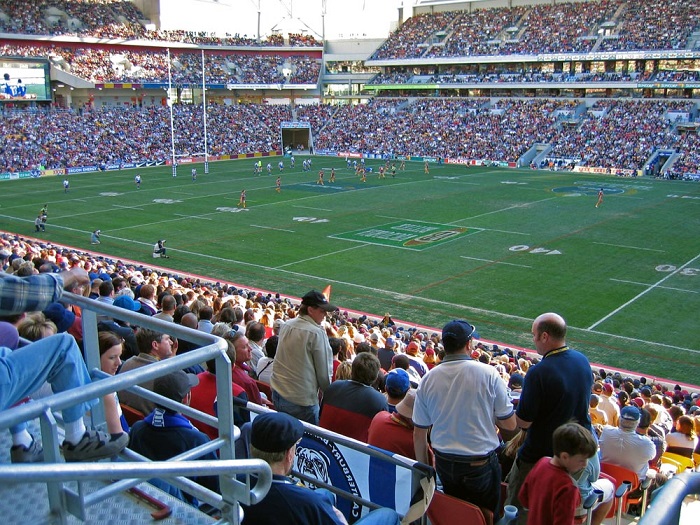 This is my take -

16. Newcastle Knights, A spirited opening four rounds to the season that shows there is light at the end of the tunnel. Unfortunately for Knights fans that tunnel won’t bear any sunshine until at least 2018. Kaylan Ponga’s form for the Cowboys must have the fans drooling in the Hunter!

15. New Zealand Warriors - Perhaps the most under-performing squad in the history of the game, the Warriors are a team of champions not a champion team. The all international spine looks clunky in attack and the entire squad is non-committal in defence. Maybe they need a few motivational speeches from former All Blacks coaches.

14. The Canterbury Bankstown Bulldogs - Living proof you cannot buy a premiership, although you can steal all of the best juniors and sneakily sign the current premiership coach and still you can’t score a point against a side also struggling. The Bulldogs spend more than other club on in game technology, perhaps they could save some money by sacking their points counter because clearly he has been made redundant by the misfiring attack of the Canterbury Bankstown Bulldogs.

13. Wests Tigers – Match Fixing, alleged drug use and a sacked coach, not to mention the mythological big four. Inside reports are suggesting that News Corp are discussing paying the club a retainer as they have sold more newspapers than all of the combined sports clubs in Australia in the last three months.

12. South Sydney Rabbitohs - A sad predicament for such a well-supported club, the Bunnies are well and truly more of a limp than hop after four rounds. It’s a long season ahead for the club now without the experience of Greg Inglis at the back. If the Burgess boys can stop throwing water bottlers and elbows they may just find some of that scintillating form from 2015.

11. Gold Coast Titans - Another year and more of the same story, it’s time to start questioning the health and fitness program at this club. Why are they continually the team that suffers from injury after injury , combine this with continual poor starts to games and you wonder at what stage will the Titans management start reimbursing fans for their memberships. With a little luck Jarryd Hayne will not opt into the second year of his contract and the Titans can re-invest the cash into three high quality players who are interested in joining into the culture of the hard working Titans.

10. Cronulla Sharks – Glimpses of magic come out of the woodwork and they are hanging tough. It’s a long season and they have some bruised and battered old heads. A premiership has well and truly disguised the frailty of their squad, young Brailey is shaping nicely as the future of the club and perhaps could even launch into one of the youngest captains the NRL has seen in the coming years. However all of this may come undone in the short term as the Sharks chose to sign a talented yet very restless James Segeyaro.

9 Manly Warringah Sea Eagles - A transitioning squad that is improving, DCE becomes a factor as his forwards begin to assert some dominance. The belting of the Bulldogs and holding them to nil will install some much needed coaching and player confidence heading into the important pre State of Origin period.

8 Parramatta Eels – A great squad that shows worrying cracks when there big gun Norman is not there to fire. They should have beaten the Titans by 60 points given the amount of cattle they had in pasture. Such a talented team just too many cracks in their armour appear when least expected. As great as Semi is playing, we all wait to see the outcome of his court case and whether or not this will impact his employment with the Eels for the remainder of the 2017 season.

7. St George – Illawarra Dragons - The highlight of the 2017 NRL season so far,the St George Dragons have offered up some utterly delightful football for their fans so far. The emergence of their forward pack is a great example of what happens when potential becomes a reality. Gareth Widdop has captured some old form similar to his Melbourne Storm days and Cameron Mcinnes and Paul Vaughan are currently the most underrated players in the National Rugby League. If Josh Dugan can keep his mind on football and Russell Packer can keep improving they may just be the story of the season. Well done to Peter Doust who has stood tall through thick and thin to get to this point.

6. Canberra Raiders - Still finding their feet after an extremely emotionally charged 2016, they will be there about's again this season. Ricky’s mind games will help them through the tough State of Origin mid-season challenge. Once again Jordan Rapana is beautiful to watch in full flight and their big boppers certainly make the game interesting to watch .

5. Penrith Panthers, The pre-season favourites tag has well and truly worn the off, a tough start to the season has shown they are not yet the side that many had thought. They are too good a squad not to make the eight but at this stage they are really underachieving all across the park.

4. Brisbane Broncos, Arguably the toughest draw in the NRL and after four rounds they have already played the top 4 sides from last year. They have a strong all round squad, Wayne is doing as Wayne does by using his personal rift with the media to distract and protect his players from scrutiny. Ben Hunt is working towards some great form and Korbin Sims has added some punch to the forward pack.

3. Sydney Roosters , A disaster filled 2016 disguised just how good this football team really is. Luke Keary is the early nomination for buy of the season and the forwards are giving the go forward that is allowing Pearce and Keary to unleash the destructive outside backs at the Roosters pen.

2. North Queensland Cowboys, Under pressure after losing Scott to a season ending injury and the other “JT” to injury the Cowboys have shown remarkable resilience and depth . Coen Hess has shown that he is Origin ready after just a handful of games and JT is the wine that continues to mature.

1. Melbourne Storm, As much as we can’t stand them you have to admit they have the right to be at the top of the early season rankings. The return of Billy the Kid was a real highlight and it made for some great viewing. Cameron Smith continues to play at the top of his game, while Cooper Cronk’s form may have old belly ache Bellamy a little concerned.

Josh Hinds is in business on the Central Coast of NSW, a family man and PSI's IT professional. Josh is an experienced writer on international sport.