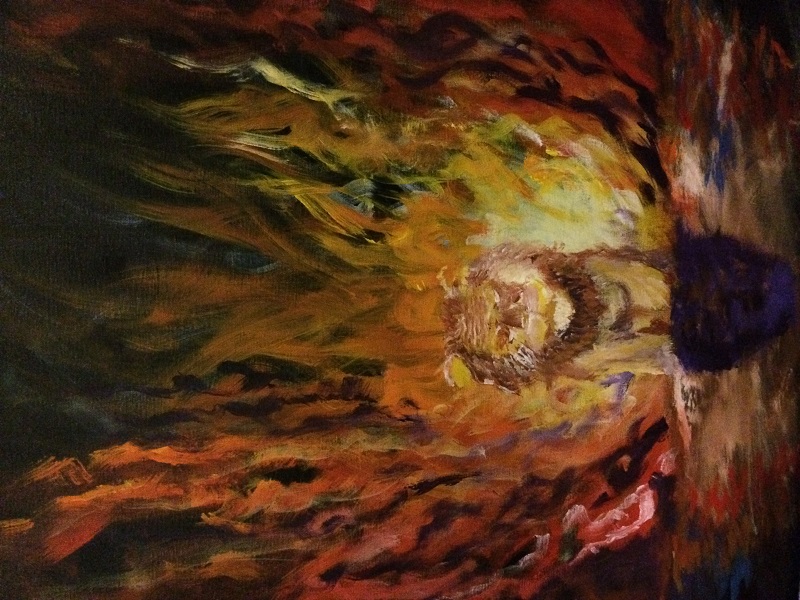 As an aspiring artist I want to see the pictures and images that I produce be released into the world and to see how they impact those who view them. Recently my life has consisted of many late nights and early mornings getting inspired and creating works for the many shows that I have had recently. It has certainly been a glimpse into the world as a professional artist and the mission that there is in the creative arts world.

Recently I had a show where my artist label JR Faith Creations would have the opportunity to showcase with an artist and creative collective in Adelaide. It was a really great opportunity for me to get the images of faith, hope, love and healing out there into the art world. What I didn’t account for was the battle it took to get to that place and present my works.

A few weeks before the show I had the opportunity to meet the other exhibitors and see the venue for the exhibition. I came away from this meeting with a real desire to exhibit, but it wasn’t so much about getting my art out there as it was about the very real battle that was going on for lives and souls in the creative world.

I remember coming away from a few conversations with artists and thinking that there was such a need for God’s love in their lives. The images, photos and products were filled with such darkness, depression, lust and sin. As I prodded some of the artists I felt such a compassion come over me to see the bondage of these artists be released and them to walk in the freedom of their identities as sons and daughters of God.

The battle to get to the show

In the lead up weeks to the show I was very aware of the environment where my works would be hanging and thus the great opportunity it was to release art from the Holy Spirit into this place. Given that this was my agenda, I was surprised at the extreme battle that the enemy put before me.

It was as if I had let that shield of faith as spoken of in Ephesians chapter 6 behind and I had become an open target of the enemy’s arrows. Now as I look back I realise that the enemy really didn’t want these images to be released into the atmosphere where people would be provoked and opened up to the presence of God.

The enemy is very sly. A lot of confusing distractions appeared. In the weeks leading up to the show it was as if every area of my life other than my art came under attack.

Suddenly I was faced with personal challenges, family challenges, occupation challenges and even future living arrangements. It was like a tonne of bricks had been heaped upon my shoulders and I just could not shake it. The worst thing was as I let this get the better of me it then impacted my art and ability to create which really was not helpful with the show looming.

The journey to the black canvas

I hit some dark moments in the soul during this time, questioning my ability and belief in myself, but I knew deep inside that I would not let the enemy win.

A crucial moment was when I went to church one Sunday night when I really didn’t want to be there. My wife dragged me along, insisting that’s what I needed. I remember being in that place and feeling pretty discouraged and sad. The worship wasn’t doing anything for me. The preaching hit some moments where light seem to be shining at the end of the tunnel, but ultimately it wasn’t until I stood before my brother in Christ at the end of the service and asked him to pray for me.

This brother was aware of my situation, but didn’t really know how deep I was in despair. As he prayed for me I felt the words of life through his prayer cut through the defences of the enemy straight into my heart. Words of Life is the only way to describe it, but what it did was release the confusion and enable me to see clearly and see the vision that God had for me for this show.

In this vision he clearly showed me standing before a black canvas amongst a big crowd and worshipping through a brush and paint colours. This vision became my focus and I knew that the most important part of my showcase was painting live showing people the amazing creator God that is within me.

Releasing the Fire of God and illuminating the darkness

A week later I stood before that black canvas amongst a 600 strong crowd with a showcase of my art work releasing images of the heavens, the glory within the earth and very face of Jesus piercing eyes looking into the crowd of people. I’m pretty sure that there was so much going on that I could not see, in the lives of people that were entranced by the work God had created through me.

But more exciting was being in the room with brush in hand and God releasing a vision for me to paint spontaneously on that black canvas. The first word that came to me was PURIFY and so as I wrote it in paint on the canvas I saw God release a fire into the room and bring his purification over the place.

What emerged on my canvas was an intense raging fire and within that fire a lion walking through the midst of those intense flames. The painting itself created many conversations with lots of crew coming up to me, intrigued by the creative process that was happening before the many eyes that were watching. There were so many opportunities to share truth and God’s love.

So what I learned about this whole journey was that I myself was going through a purification process. The show was not just about illuminating the darkness and seeing the light and fire of God overcome in the art world, but also to allow God to purify and ready me as an aspiring artist for his purposes in future art shows. 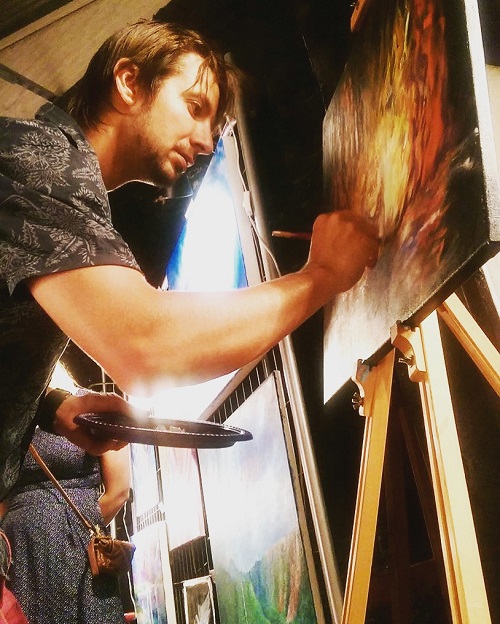 Justin Monaghan is currently launching as a professional prophetic artist under the label JR Faith Creations. He is married to Liana and lives at the beautiful beach of Port Willunga. Justin is also heavily involved in his local surfing community of South Australia as a surf coach, a judge of surf contests and a member of Christian Surfers

Justin Monaghan’s previous articles may be viewed at