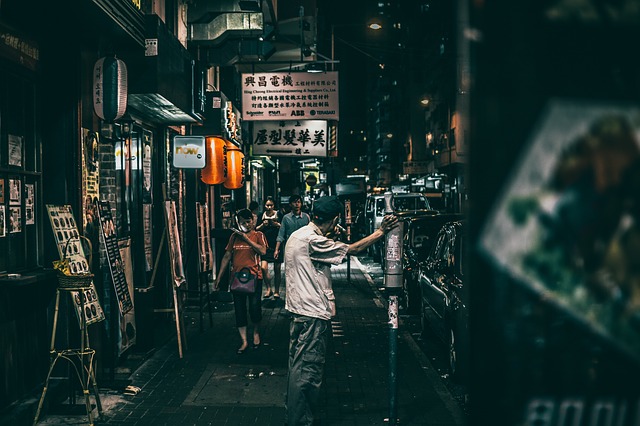 I went on three short term mission trips, one in 1998 to China, one in 1999 to Indonesia and one in 2000 again to China. The trips to China I did, was covert tract bombing evangelism and the trip to Indonesia was to help with a Christian conference with prayer and evangelism. The trips did a lot to form and influence me in the years to come, I just want to share some experiences I had on the trips and how they have impacted me since.

Smuggling gospel tracts to be distributed covertly in a number of cities was seen as an effective means of spreading the gospel to the Chinese people in the 1990's under the communist government. It was effective because unlike today, people in china were not inundated with junk mail. They used their mail box primarily for personal correspondence, thus any publication was taken seriously and read.

It was considered effective because previous to the internet and the opening of China to the West, people were cut off from international news and religions. We were also operating in a time when Hong Kong and Macau were under the process of being handed from colonial powers, back over to the government of China. The full time missionaries were based at Macau and operated unhindered by the government on the mainland.

Now that's the boring bit over, doing this sort of trip was right up my alley, as I had previously been involved in partying and the drug culture, with jumping fences and mayhem pretty standard features of the lifestyle. Doing 'Rips' was something that all my friends and I were keen on, which was locating a house or shed that grew marijuana, and breaking in and stealing their plants. To do an effective 'Rip' could see you with pounds of marijuana worth thousands of dollars, or it could end in disaster.

With getting shot, stabbed or beaten half to death came with the territory. Some friends of mine were actually caught and held hostage at gun point by some organised crime figures, who interrogated them and threatened to make them disappear. If that had admitted to ripping them off, my friends probably would have disappeared for good. So you can probably see how doing some covert tract bombing for Jesus for appeal to me.

The first trip we landed in Beijing and smuggled our gospel tracts directly through in out luggage. Our second trip we were smuggling them over the border from Macau into mainland China. The idea of the trip is the group in separated into teams of two for blokes and teams of three for women, and each team is given an itinerary of where to go. Teams would travel to different cities during the day via bus or train, tract bomb the city during the night with 2000-4000 tracts, and be on the first bus out of town in the morning before authorities could detain you.

The first night out I remember walking up to a small row of houses and just as I passed from the street light into the shadows, a massive dog started barking insanely. Well I can tell you I needed to change my jocks after that! The need of staying undetected was a very real one, with my partner and me jumping over fences, into ditches and drains and running down alleyways. The itinerary we were on was quite gruelling, one of our bus trips lasted 16 hours, some parts off road through streams and wilderness and some up into the mountains. I was never scared of heights or anything really (the folly of youth) until that bus trip.

In China, drivers don't use the indicators and follow road rules like us in the west. They beep their horn to overtake, and some of the overtaking was insane, I'm talking high in mountains around tight bends! I remember praying so hard when I looked out the bus window to see the back wheel disappear over the edge of the road and I couldn't see the bottom of the mountain.

On one bus trip I remember sitting at the back of the bus, to covertly drop tracts, and as I saw the people that I was dropping tracts, I felt overwhelmed by a sense of god's love for them. We were in the middle of absolute no-where, seeing people that probably never owned a television, or had even seen a westerner in their life.

My heart absolutely broke for them and I remember crying like a child as I dropped screwed up tracts praying that I would see one of the pick one up and know the love that was breaking my heart. After that I felt compelled to share the Gospel with someone and on another bus trip I prayed for a sign that I could, given that it was a great risk and not something that was encouraged by the full time missionaries. After I prayed for a sign, the bus driver put on my Hillsong worship cassette tape, that I gave him to play hours previously at the start of the trip.

When I heard the music I took it as a sign and started sharing the good news with the passenger next to me out of my basic phrase book that was supplied to me. I thought it all went well and the man seemed responsive. As he got off the bus in the city of our destination, his jacket was pulled back and I saw a badge.

The man I share the gospel with was an undercover F.S.B officer (China's version of the F.B.I)! I told my team mate and when we got off the bus we noticed the man and his partner in a car and they were following us. We walked down the road and as we walked past a truck, out of their sight, we doubled back fast and ducked up a side street. We managed to lose the surveillance but unfortunately the city we arrived in was a designated place where we were to meet the rest of the team. That night we all met up in a KFC and was really excited and glad to see each other. Some other teams had really struggled to deliver their quotes of tracts. That night we came under surveillance again unfortunately. Decisions were made to keep going.

Towards the end of the trip, we were exhausted from gruelling bus trips and walking hours every night delivering tracts. As we arrived at our hotel we decided to get some sleep and accidentally slept through our alarm and missed our chance to hit the city. We were so disappointed that we went out in the morning to try and find some quiet spots to tract bomb with discretion.

If you have never been to China you will never know how busy the place can really be. We were struggling to deliver any without arousing suspicion. My partner, who was the leader of out pair, decided to try a construction sight. We went through a high wooden gate with barbed wire and Chinese signs written in red. Well those signs must have been a warning because when we had walked 50 metre and turned the corner we saw some guards dogs... to be continued

Mark is married with 3 kids. He has been a youth worker for 10 years. He has worked in lay and paid church roles in various denominations for 15 years and is currently a member of the Adelaide Anglican Diocese.  Mark has a B.A from Tabor College Adelaide.