When I was growing up, someone once asked "what would be the worst way to die." My response, "drowning." The older I get and the more I have time to think on my response, the more I realize how profound it actually was.

Drowning... Swimming for your survival while gaining no ground. Trying to catch your breath, the pressure of the water tightening your chest with every breath, gasping for air and then water filling your lungs... It sounds absolutely horrendous doesn't it? Yet I have found myself drowning at various points of my life.

In fact, people find themselves drowning a lot more than they should! The weight of their problems overwhelms them to the point of panic. Debt, loss, fear, worry, sadness, unforeseen circumstances, and the list goes on. Each one as if it's part of the mighty ocean surrounding you weighing heavy on you, and you're giving it all you've got to try and stay afloat... you're desperate to find joy... a life raft, rescue...

Maybe you're the person looking at where you are in life right now, reminiscing of a time when life was different, it was filled with wonder, hope, love, and the possibilities of a grand future. Yet where you find yourself is miles away from that destination, adrift and lost in the sea of disappointment, lack of purpose and failure.

A man, a boat and a storm

Now, there are still days in which I feel that I'm being tossed around in the sea again, but it doesn't last long. Because, I've found a reliable source of rescue.

I can say this with full confidence, because I have lived it! I've been in the middle of the waves of life, treading water, knowing that as soon as my arms get tired, it was only a matter of time before I went under. And in the middle of each of drowning I met my rescue.

There was a time when this group of guys went on a fishing trip. They went out at night, because the way you fish the giant lake they were on was at night. During the day, the surface temperature of the water drove the fish down to the deep, but in the cool of the evening the fish swam closer to the surface because the water temperature was cool enough yet warm enough for them. So, they were out in the middle of this massive lake that you couldn't see land from any direction, in the middle, fishing and hanging out.

While out on the water, one of the guys, their leader, decided to take a little nap. So he found a comfortable place on the boat and decided to doze off. While he was sleeping, a storm began to swell. The winds began to pick up, the waves began to toss the boat. And everyone on the boat began to feel terrified.

Everyone, except for the guy who was asleep. Everyone on the boat began panicking, they didn't have any idea what to do. The storm was surrounding them, and it was intense. They do the only thing they can think of - wake up their friend. They wake him up and wonder how he could sleep in such a storm.

Now, this part of the story, it's where I'm going with all of this. You can find rescue, rescue in the person of Jesus Christ. When you're drowning, he can lift you out of the sea When you're sinking, he can pick you up and place you on solid ground. And, when the storm is raging, he can command the wind and the waves to be still, and they will. (see Mark Chapter 4, verses 35 - 41)

Cling to the life-raft

When you're tossing around in the wind and the waves, you have a life-raft, cling to it. Your life-raft is also the one who can calm the storm. Fix your eyes on him, dive into his word, pray, seek him. When you're in the middle of the gale force winds, remember this promise, "I will never leave you nor forsake you."

No matter what comes your way, no matter where life has you right now, your rescue is found nowhere else and in none other than the face of Jesus Christ.

It is rescue you can bank on, it is hope you can stand on, and it's knowledge that the storm will quit raging, the seas will quit swelling, the quicksand won't sink you. You will make it out alive. The catch is this - seek him and you will find him. Seek him through the scriptures, seek him through prayer, and seek him through other followers of Jesus. This won't end you. It's not over. 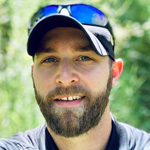 Zack Morris from Sarasota, FL has been in pastoral ministry for over 11 years. He enjoys spending time with his kids, riding his motorcycle, and out on the water. He’s an avid blog writer and is currently working on a book.

Zack Morris from Sarasota, FL has been in pastoral ministry for over 11 years. He enjoys spending time with his kids, riding his motorcycle, and out on the water. He’s an avid blog writer and is currently working on a book.