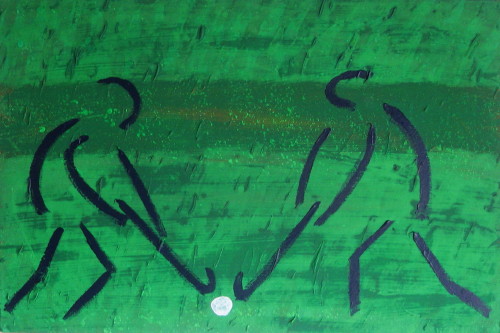 A surprising realisation came from the lips of Ric Charlesworth a few years ago, the renown Australian hockey player and coach, a World Cup gold medallist from London in 1986, and coached Australia’s national women’s team, the Hockeyroos to Gold and the Kookaburras to World Cup glory.

Charlesworth had offered numbers of comments which have been taken up by the mass media – a recent one was from the Rio Olympics after the Australian Rugby 7 Olympics women won Gold and he referred to this victory as 'soft'.

He later explained his comments in terms of Olympic history and the nature of team sports such as hockey and rowing and individual sports such as swimming and track & field, that a new sport with a limited number of teams winning Gold is not quite the same as the above.

Another was after the 2010 Champions Trophy and recognised problem areas that placed the team in difficult situations in the first place. He is characteristically never complacent, and he made the following comments:

“We made some very bad errors in defence, we know what our problems are and we have a lot of work to do.” He then continued: “There will be some changes (in the player line-up), our World Cup team (New Delhi, India from 28 February) won't look like this.”

The Kookaburras went on to win the World Cup the following February in India. His  concerns about defence were very real indeed. What fascinated me, as a hockey connoisseur having written 5 books on hockey and for The Australian newspaper on hockey for 24 years to 1994, is the nature of Ric Charlesworth's comments.

Charlesworth has not only expressed the normal philosophy in our workaday world; ‘work hard, get the results, receive the rewards’; but he has also echoed the Biblical message which states that all our righteousness is as filthy rags (Isaiah chapter 64 verse 6) in God’s sight,” (winning the tournament wasn't anywhere near good enough).

However, there is a stark difference between the way Charlesworth said he would rectify the problem, and the way the Bible explains Christianity. This is super important and illustrates the Christian philosophy.

The difference, by pointing out what Charlesworth had told his team, that although they are the victors, they are still nowhere near good enough and the axe will fall in those whose performance did not come up to scratch. An overseer would ‘weed out’ the weaker players so they would not get a chance in the next competition.

This is the norm for this world in which we live. If you don’t perform as expected, there is a coach, or an employer or a boss or a teacher, who will suggest that you should no longer be in a position to even try to get better results.

However, in Christian thought, the Gospel says that God does not remove the weak links, but that He has put in place a Saviour to make the whole chain work well, regardless of how weak you are as an individual.

Our limited minds cannot comprehend God's love because it comes with no strings attached. He doesn't love us if we have done A or B; he loves us unconditionally. “The Apostle Paul asks, 'Can anything ever separate us from Christ's love?' (Romans chapter 8 verse 35). The central message of the New Testament is that Christ died for us while we were yet sinners.”

Jesus died on the Cross for our sin. As a result, we have salvation, which is a gift from God, it is all God, nothing of our part. The problem for man is this idea that we think 'performance'  must equal ‘reward’. The Gospel says that, no matter how good your performance, it is not good enough. It fails the test that God sets, which is perfection.

I could not have thought of a better example of how these two world views are so similar yet so opposite as Ric Charlesworth's coaching comments provides. Herein lies the great difficulty for many, as the Gospel doesn't show that performance equals reward.

The Gospel provides another ‘world view’; that in which Jesus, the perfect man, the sinless man, died on the Cross in our place for our sin, and this is a Gift.

It is all His Grace. Nothing of what we have done comes into play. It is mind-blowing. “This Grace is available to all who repent of their sin and receive Christ into their lives as Lord. Christ performed, not us, and God has given us something we don't even deserve.”