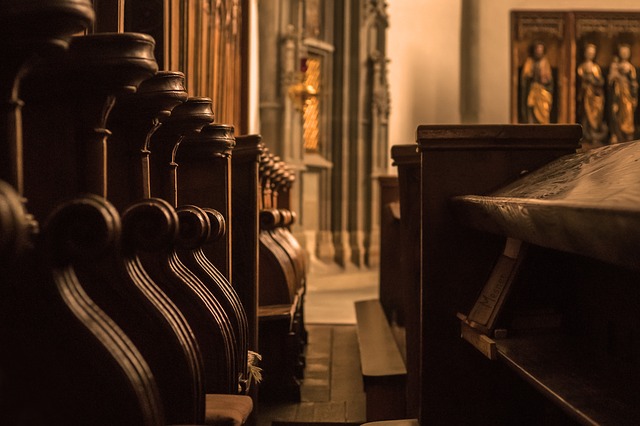 Particular moments in Christian history proved undeniably defining. Times where great acts upended the world for good, like during book of Acts, or for ill, as seen in periods like the Dark Ages.

Other generations witnessed giants like Martin Luther and the reformers propel the church back to its Biblical roots, or much quieter lives like Mother Teresa forsake everything for the poor and needy.

The crucial point is this: every Christian age was defined by something. Whether this be by truth, action, and heart, or largely the opposite: error, inaction, or weakness.

Such times usually came in cycles, as the church swayed between realising its identity and calling, to seasons where prosperity resulted in sleep-walking in the opposite direction. In every case, Christian generations were defined by an understanding of their time and a subsequent response to its unique opportunities and challenges.

Dark clouds on the background of the church’s self-portrait

The modern Christian church has also been painting its own self-portrait against the background of the world’s canvas over the last fifty years. While few seem to realise it, we’re now in a period which will either make or break this defining image. So a pressing question arises: will we be a masterpiece or a washout, a Picasso or a forgery?

If you feel I’m being overly dramatic, consider the following seriously dark and sweeping brush strokes beginning to dominate the background of our time.

The spectre of terrorism has surprisingly begun to rear its ugly head across Europe, especially in France, Germany and England. This reality, along with governments’ inability to adequately deal with mass migration, is giving rise to increasing public discontent with traditional bureaucracies and their agendas.

Populist political influences are thus gaining traction, even in America, by a celebrity president intent on ‘making America great again’ through nationalist-driven economic reform, protectionist immigration policy, and a general disdain for the ‘tried and true’ ideological platforms of the past.

The world’s moral code faces an unprecedented crisis of character through new realities like transgenderism and gay marriage laws. Indeed, the very foundations of Western society are being rocked through an explosion of drug culture, corporate criminality, online abuse, and immoral entertainment and fashion.

The world’s peace and prosperity are also under threat. Countries like China, Russia, and North Korea are increasing their military capabilities and reach at an alarming rate. This new reality is testing the West’s collective resolve and the waters of the post-Cold War world order.

What once was so certain now seems vulnerable. Even easy and ‘tried and true’ things are becoming fraught with difficulty and perplexity—even unexpected danger.

Don’t get me wrong, the clouds of these realities don’t entirely eclipse the present good or God’s work through His people over the last half-century. Much of the West and modern church still enjoy peace and prosperity, and a moral conscience and Gospel influence which past generations would’ve died for.

Nevertheless, the darkening world scene reveals a critical flaw in this picture, namely, that the body of Christ is no longer the earth’s most influential presence. The world’s societies and institutions are now dancing to the beat of another drummer, and the sounds of those postmodern realities are getting louder.

Defined by struggle and hardship?

Martin Luther King Jr’s time was one such moment.

Set against the discrimination and oppression ravaged America of the 1950-1960’s, Luther led a civil rights movement which forever transformed the nation’s view of race and human rights.

Luther enshrined the memory of this brave crusade in the national conscience during the 1963 March on Washington, when he spoke of the need for immediate ‘vigorous and positive action’ on civil rights due to ‘the fierce urgency of now’ (www.time.com; http://time.com/3672274/civil-rights-movement-lesson).

The modern church era is facing its own ‘fierce urgency of now’ moment. While the reasons differ, they’re no less significant or defining. The church’s own interests are even at stake.

Like everyone else, Christians may soon face a lack of peace and prosperity due to war, and defending against terrorism may bring a curtailing of religious freedom and rights which it has enjoyed so abundantly till now.

More strikingly, the church may lose its salt-preserving influence, and surrender the fervent heart of its world-wide mission by failing to embody its own beliefs. Unfortunately, as previously mentioned, this slide has begun already.

Learning from the masterpieces of history

We should allow Christian history to teach and inspire us to offset the present dark and ominous tones of immorality and uncertainty with the bright and striking colours of Holy Spirit-led action, integrity, and Christlike compassion.

Past heroes of the faith are watching on, and calling us to copy the vivid image of their own grand historical portrait.

Like individual brush strokes on the canvas of our time, each of us can colour humanity’s collective future for better or for worse.

Our defining moment is coming.

Time to get painting.

Tim’s home is on the Gold Coast in Queensland. He has a Graduate Associate of Theology degree, taught in Christian Education for over six years, and is currently studying a Masters of Divinity in theology at Liberty University in the US. He enjoys writing, the beach, and spending time with family and friends.