God had a plan for my life

I have reached an age where I can look back over my life and recognise the hand of God guiding, nudging, directing and leading me to where I am today. Throughout my life I see one thing is apparent: God had a plan.

I was born a sickly child in November 1953. The first child of two young parents who suffered the unfortunate situation of having their new baby born with an incurable blood disease that had claimed the life of every person ever born with it by the age of puberty.

The first two years of my life were spent in hospitals and the next ten years were a series of blackouts, fainting spells, hospital stays, doctors visits, new drugs, treatments, biopsies and the medical poking and prodding associated with experimental cures. Such was life!

What the doctors didn't know was that my parents had come to Christ, and the Lord had a plan.

After 12 years of treatment the doctors said IF I survived I would always be weak, sickly, and because of the incredible quantities of drugs, my bones would be weak and break easily.

It was around this time a new medical team was about to attack my condition, and it would all start over again. My mother was so despondent she prayed and cried to the Lord for my healing, and He heard her prayers.

I did what all kids did. Played football and cricket, climbed trees and fell out a few times, went ice skating and became deeply involved in rock music.

Even though I grew up in a Christian environment, I rebelled in my teenage years as the draw of rock music took hold of me. I played and sang with a number of very good bands and had several opportunities to do it professionally, but life took a different turn.

It wasn’t meant to be because...God had a plan.

A good woman came into my life, we were married and in February next year will celebrate forty-five years together.

After working in senior management roles in corporate environments that took me across the world, I finally retired from paid work. The Lord had a plan throughout my working life and I look back amazed at how He guided my work life.

In 1979 my wife and I went camping with our two toddler daughters. My wife was six months pregnant at the time. We set up camp in the early evening, and for some "crazy" reason we set up camp completely back to front to how we normally would. It was getting late so I told my wife I’d change it all around the next day.

We didn’t know it at the time, but the Lord had a plan.

At around midnight that first night, a huge tree fell on our tent, pinning my wife and I under it. I lifted the tree with one arm to pull my wife out from under the monster. I had been crushed across the top of my legs and midsection, and my wife had her leg broken and two pelvic fractures, remember she was six months pregnant.

Ambulances took us to hospital where they did not believe I would survive. They had begun to fill out my death certificate.

But, the Lord had a plan.

I recovered without a single broken bone. My wife had our son two months later and the doctor attending her cried. They hadn’t told us that every single time they checked they could find no foetal heartbeat. When our son came out screaming, the doctor and nurses wept.

My wife and I were holidaying in central Australia twenty years ago when she took ill and was flown back to Melbourne from Alice Springs.

While driving home alone the Lord spoke to me saying “Speak to my people.” He also said he would give me a sign, which He did. My hands at the time were covered in dermatitis. It would not heal without regular cortisone ointments, but it always came back.

I had no ointment during this holiday and the dermatitis was extremely painful. It cracked, bled, and itched across the backs of my hands. The Lord said to me, “Look at your hands,” which I did. That night the pain had ceased and within a couple days the dermatitis had completely healed, without cortisone, and has never returned.

You see the Lord had a plan.

Now I am trying to answer the call to speak to God’s people. I write books, articles, blog, podcast, preach and teach, and train people about the things of the Lord, most recently running courses on being an Encourager. I give God all the glory for my life as it is only by His grace I live today. 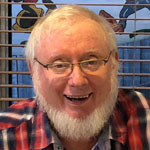