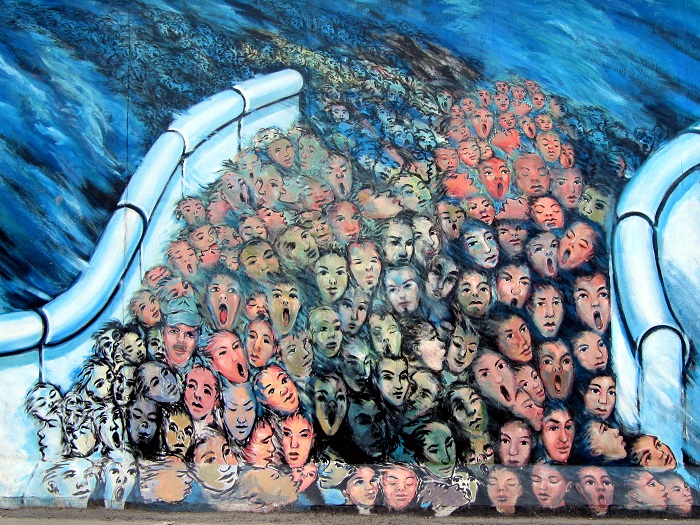 We're one but we're not the same

We get to carry each other

In John chapter 17, verse 1, Jesus prayed that his disciples would be one as he and the Father are one. It was a prayer of boldness and, on the surface at least, impossibly naïve and unrealistic.

But the fact that this prayer was largely lived out in the life of the early Christian movement is evidence to me that this was not just a humanly-powered movement.

Jesus said we are the light of the world. He said we are to be an alternative community, caring for those nobody else cares about, being one in love and grace, and accepting each other.

In Jesus' new order, there are no dividing lines between people of different ethnicities or genders. The walls of division are torn down. There are no statuses; everyone is equal.

We see this first in Jesus’ strange choice of disciples. You had the tax collector, Matthew. Tax collectors were hated in those days because they gained their riches through ripping people off, and they worked for the oppressive occupying Roman regime.

Then alongside Matthew you had the Zealot, Simon. Zealots advocated violent overthrow of the Romans. Simon would initially have been attracted to Jesus because of the popular belief of the time that the messiah would come to do just that: ride into Jerusalem as a conquering ruler and throw out the oppressors once and for all.

Just in these two people, you had worldviews which couldn't have been more opposed. It was like having a member of the Socialist Left on the same team as a hard-line US Republican. And Jesus prays that they will be one. It was a bold prayer!

But as the Spirit came at Pentecost and the church gained momentum, outbreaks of God’s rule began to undermine that of the Empire.

The early church was characterised by everyone sharing what they owned. In fact, they didn't even consider property to belong to any one individual. They broke bread together, prayed together, and shared everything. They loved their neighbours and took in those who the rest of the culture abandoned.

Social historian, Rodney Stark, says that a major reason for the explosive growth in the fledgling Christian movement in the first century was their care for the poor. When baby girls were literally left out to die by their parents, the Christians would take them in and raise them. Similarly, when plagues struck much of the empire, Christians risked their lives to care for the sick. Many Christians died in the process, but they did so living out the command of their Master that whenever they did it to the least, they were doing it to Jesus himself.

But it wasn't some socialist utopia that the Christians were setting up. They knew that would never work. No economic or political system would ever bring in the kingdom of God. What drove the early Christians was the Spirit of God within them.

It wasn't through any form of politics, though it was political. It wasn't through any economic system, though it had powerful economic implications. It was through their faithful following of Jesus that the early Christians changed the world. They were outward looking, seeking only to love rather than look for love, seeking to understand rather than worrying about being understood, and seeking to console the broken-hearted rather than concerning themselves too much with their own consolation. Some of today’s church can take a lesson from that.

No wonder Jesus prayed that bold prayer the night before he died. It was answered, and it has been answered again and again through the ages as Christians have come together to abolish slavery, to gain rights for women, to bring children out of sex trafficking and to pressure government to give our fair share of aid to the poor of the world.

The dream Jesus had and prayed for has materialised over and over throughout history. In God's new order, these dreams become reality as together we tear down the walls of division that divide this broken world.