When I was thirteen-years-old, I decided to start attending church. In retrospect this was a rather bizarre decision given that I didn’t know any Christians. I had been sent to Sunday School rather irregularly as a child and so I had a vague idea of how church worked.

The reason I started going to church was that I was bored. Often, we hear about people who leave church because they are bored, but that’s the reason I went. My parents were often busy on weekends. I had very few friends and lots of spare time. I guess I thought church was a sort of social club where I might make a few friends.

The church I chose to go to was rather conservative. I chose it because it was within walking distance of my home. No one paid much attention when I turned up but I was invited to the monthly morning tea after church. From there I met the youth group leader who was an enthusiastic Christian. She invited me to youth group on Monday nights. This was great. I was suddenly getting a social life as I was now going out twice a week.

The youth group leader understood that the youth at the church needed more than this particular church was able to provide, so she would encourage the young people to attend youth activities that other churches in the town organized. Since she was providing transport, I went to practically everything I was invited to. This meant I was now going out three or sometimes four times a week. Life was really looking up.

In the October I went to a youth group camp. The leaders were Christians from other churches who were older teenagers or in their early 20’s. I realized there was something different about these young people. They had something in their lives. I didn’t know what it was but I knew I wanted it.

They seemed happy and at peace. Over the course of the weekend, I realized they had Jesus in their life and I wanted him in mine. They told me that I needed to surrender my life to God. I didn’t think this was a big deal. At that time, I didn’t really want the life I had, so if God wanted it, he could have it.

The night I came home from camp I asked Jesus to come into my life as Lord and Saviour. I often think it’s remarkable that I became a Christian because 12 months before I did, I didn’t have any friends or family who were Christians.

My conversion experience was a significant event in my life and it convinced me to continue my Christian walk. Six years later, I married Ross, who was passionate about God. He worked for a bank, but spent his spare time at church-related functions, either attending them or running them.

My biggest test of faith was in 1988 when Ross was diagnosed with cancer. At the time, Ross and I had been married nine years and we had three children under the age of six. I couldn’t understand why God would allow such a thing to happen. Ross underwent six traumatic months of chemotherapy. I wondered why God didn’t heal him instantly and relieve us of our struggles?

My chief emotion at the time was feeling overwhelmed. I remember at one point I felt I could no longer “do” Christianity. I just didn’t have the energy to “work” at being a Christian. It was at that moment I realized that I didn’t have to. I suddenly understood grace.

I had heard and read about grace for years, but it was only in that moment I understood. Grace was a free gift and I did not have to continually do things to earn God’s love and acceptance, since I was already loved and accepted.

Some years later Ross became a pastor. It was to be another test of faith. I struggled with being a pastor’s wife. I’m an introvert, and I soon realized that my personality didn’t conform to a congregation’s expectations of a pastor’s wife. However, being a pastor’s wife gave me the opportunity of writing devotional thoughts for the church newsletter. I’ve been writing ever since.

Mostly I write devotional thoughts, book reviews and other inspirational articles which I post on my website. I have written a book, as yet unpublished, about the many spiritual lessons I’ve learnt in my Christian journey.

Ross is now semi-retired and together we like to help small country churches, with preaching, pastoral care, and pastoral advice. We have three married children and two grandchildren who we like to visit. 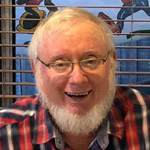