We would strongly urge anyone that might be at risk of an eating disorder to think very carefully before watching this film.

That was the official word from the UK’s national eating disorder charity Beat on the release of the Netflix film To The Bone.

It’s not every day a film comes out with a health rating, but To The Bone is a special case. The film is a stark depiction of anorexia, starring Lily Collins as the young protagonist, and has caused a mountain of controversy over its subject matter – not least that showing the protagonist’s disorder so graphically could inspire others to follow her example.

Why is it so difficult to make a responsible film about eating disorders? As a former anorexia sufferer, I can understand first hand why it’s so complicated. Here are three reasons why.

Why? Because with eating disorders, you don’t just want to be thin; you want to be the thinnest. In fact, you’re trying to outdo everyone else, whether it’s in self-discipline, eating less or being the tiniest. You can eat two peas with your dinner, and you’ll be traumatised if someone else at the table says “I’m not really hungry” and eats one pea. Why? Because you need to be the best.

So even when watching a fictional movie, you can be affected by what you see your ‘thin competition’ doing – whether it’s how many kilos they say they weigh, how many crunches they’re doing, or how much food they’re eating.

To The Bone doesn’t pull any punches in order to take the shadows away from anorexia, but in so doing, it can easily become a ‘how to’ manual.

Anorexia is an addiction

Eating disorders are an addiction in reverse – because instead of being addicted to doing something (like drinking alcohol or taking drugs), this disorder is an addiction to not doing something. When you don’t eat, when you eat less than others at the table, or when you see the number on the scale shrink, you get a hit. It’s an addiction of attrition.

What’s particularly insidious about this addiction is that you get validated for having it – and this validation is in itself addictive. Society rewards us for losing weight and being thin, as well as for the ‘self-discipline’ it takes to achieve it – but this can have disastrous results if you’re losing weight because of unhealthy practices.

So the addiction is particularly hard to shake because of this validation (you’re being told ‘well done’ for the results you’re getting) and also because of the competitiveness that defines the disorder (you constantly think you could look better). Seeing someone play this out in front of you in a film like To The Bone is just adding fuel to the fire – look, you should be doing this!

Which brings me to a final problem...

One study showed that anorexics walked sideways through a door that they could easily fit through, because they truly think they are bigger than they are. They honestly, consciously and unconsciously, have a distorted perception of how much space they take up.

This is why depictions of models in magazines come under such scrutiny. These women are often well below the healthy weight limit, which normalises this image for the general population and can cause further confusion for those who already can’t perceive their own body mass accurately.

So when films like To The Bone involve actresses who are not just thin, but were asked to lose weight (!) for the role, you can imagine what can happen to someone whose reality is already distorted... especially when that character in front of them is supposedly engaging in extreme behaviours to get there.

What to be aware of

So – is it possible to make a responsible film about anorexia?

Film plays an important role in de-mystifying taboo subjects like this, and I’d hate to say that no films about anorexia should be made at all. To show godly empathy to others, we need to understand them, and portraying stories is an important part of that. But for my two cents, there are clear steps that filmmakers can take to mitigate some of the negative effects.

One, avoiding numbers is important – whether it’s how many kilos someone weighs, how long they jogged for, or how much food they’ll apportion out each day. Numbers are powerful to an anorexic, especially because of the addiction to being smaller or lesser than everyone else.

Two, omitting images of skeletal body frames which can be seen as ‘competition’. Some filmmakers have got around this by covering the main character in clothes, or getting creative using figurines as actors instead of humans. (This was exemplified in the 1987 film Superstar: The Karen Carpenter Story, which used Barbie dolls to play the roles and whittled away the waist of the main character to show the detrimental effect of her disorder.)

Three, avoiding scenes of specific behaviours. This could include purging after a meal, using laxatives or undergoing punishing exercise routines. Too much detail can easily become a ‘how-to’ manual for those at risk of an eating disorder and serve as a template for behaviour.

Films like To The Bone are important for helping outsiders understand what the disorder can be like. Without having had it, it’s a difficult illness to understand, and “But God made you the way you are” isn’t a sufficient way to really speak comfort to those who deal with these types of thoughts. But these films are very easy to get wrong, and must be done with consideration of what effects of this depiction could have. 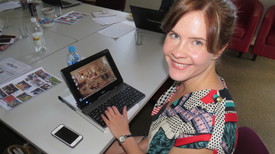 Cheryl McGrath is a communications professional at the Christian mission organisation CMS Victoria. She has a background in editing and publishing, and lives in Melbourne.