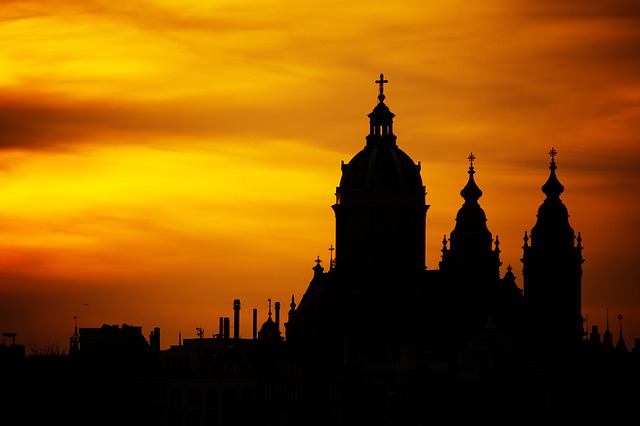 Two street preachers were arrested and convicted for preaching the Bible in public, ‘offensively.’ In the British court, the public prosecutor claimed that quoting parts of the King James Bible in public should be ‘considered to be abusive and criminal in nature.’

Apparently not acceptable in what they called ‘modern Britain.’

During her failed US presidential campaign Hillary Clinton said to the Women of the World Summit ‘religious beliefs and structural biases have to be changed.’

The openly lesbian Bishop of Stockholm has proposed a church in her diocese remove all the crosses and put down markings showing the direction to Mecca for Muslim worshippers.

In Glasgow, Scotland, St Mary’s Episcopal Cathedral provost the Very Rev. Kevin Holdsworth defended his inclusion of the Quran reading in the Eucharist Service. In his effort to impress Muslims Surah 19 (Quran) was read which claims Jesus was not the Son of God and is not to be worshipped.

A school district in Pennsylvania paid the Freedom of Religion Foundation, an atheist group, $40,000 and by court order removed a monument of the Ten Commandments. The court case extended for 12 months and legal fees for the school insurance group was $163,500.

Last February Rev Franklin Graham warned America could ‘self-destruct.’ He commented on moves at Disney. “Disney has aired a cartoon with same-sex couples kissing. It has also been announced that their new movie Beauty and the Beast will feature a gay character in an attempt to normalise his life style,”

Rev Graham said. “I met Walt Disney when I was a young boy – he was very gracious to me, my father Billy Graham and my younger brother when we visited. He would be shocked at what has happened to the company that he started,” Graham said. (Charisma News, 3rd February, 2017)

It is very obvious Bible-based reality is under vicious attack. Judeo-Christian values are being removed in areas of religion, education, media, business and politics. Computer scientist and cultural critic David Gelernter spoke with Mosaic magazine. “Faith in the Judeo-Christian religions is dramatically weaker than it used to be,” he observed.

Children were once raised on the Ten Commandments and the “golden rule” he said. In a world that seems to be spiralling into lawlessness and violence, Gelernter asked “What ethical laws are they taught?”

Geert Wilders is favoured to become the next Dutch leader. He told the BBC, “We will cease to exist. Our identity will be taken away by the Islamisation of our society.” Wilders leads the Party of Freedom and has been called ‘the Trump of the Netherlands.’

Bible believing Christian leaders must unite to proclaim and prosper the faith. Positive thinking needs a reality check. Division must be confronted. Unity on a solid bible base is vital. Pontius Pilate turned to Jesus and asked, “What is truth?” Even the most powerful politician of his day was searching for that all-important treasure.

This dark climate is not new. Thousands of years ago God challenged the people by saying if they find a man in Jerusalem, who does justice and speaks truth, I will pardon the entire city. That is a frightening thought? In all of Judah, at that time, truth was absent. (See Jeremiah chapter 5, verses 1-3)

Writing for Charisma News Rev Franklin Graham said, “In the Bible, we read of a pattern that repeated itself over and over in Israel's history. The nation would lose its focus on God and became accommodating toward sin. That led to God's judgement and troubled times. When the people humbled themselves, repented and cried out fervently to God in prayer for help, He responded by giving them a fresh opportunity. But before long, the people of Israel would relax and once again lose their focus on obedience to God.” (Charisma News, 2nd February, 2017)

Forces of greed, power, ambition and selfishness are at loose and employing spiritual terror tactics.

The Bible describes a time, when there was no king in Israel. ‘Everyone did what was right in his own eyes,’ it says. (Judges chapter 21, verse 25) No king indicates there was no absolute authority. People embraced their own idea of truth. That situation describes today.

They lead vital areas of housing and urban development, education and energy. Jerry Falwell was appointed to lead a high education task force to focus on ‘deregulation.’

There have been many headlines and speeches associated with the bitter political climate in the USA but one moment stands out. Vice President Mike Pence quoted the Bible. “If my people who are called by my name will humble themselves and pray and will seek my face and turn from their evil ways, then I myself shall hear from the heavens and will forgive their sins and heal their land.” (2 Chronicles chapter 7, verse 14)