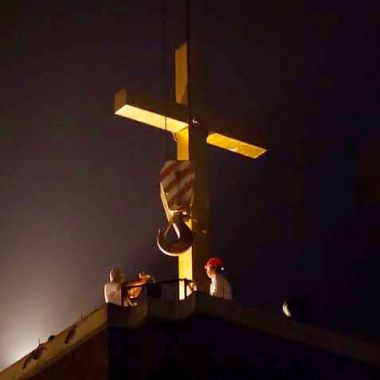 On 15 February 2017 Zhang Xiuhong, the former deacon of Living Stone Church, Guizhou province, was sentenced to five years in prison. Zhang was first arrested in July 2015 and was held in detention for a year and a half before standing trial on 23 January 2017.

In late July 2015, Zhang Xiuhong, the presiding deacon of Living Stone Church, was stopped and hauled from her car as she was driving near the church building. One of the assailants climbed into her car and drove away.

Zhang's house was later raided, her computers, USB drives and hard drives confiscated, and her husband taken into custody, leaving his 80-year-old mother and three-year-old adopted daughter alone in the house. The next day her husband was released, and Zhang was subsequently charged with 'illegal business operations'. However, her interrogators' questions mainly focused on the church, its pastors and other core members, rather than her business activities.

Zhang Xiuhong's sentencing comes as part of a wider crackdown on her church. Living Stone Church, an unregistered Protestant church with over 700 members, has experienced increasingly repressive measures by the authorities. A "Rectification Order" received by the church on 18 November 2015 from the Nanming District City Urban Administrative and Law Enforcement Bureau stated that the church's use of a commercial building was illegal. Several church members were then detained or fined in connection with the case, and on 6 January 2017 Pastor Yang Hua was sentenced to two and a half years in prison.

Christian Solidarity Worldwide's Chief Executive Mervyn Thomas said, "This sentence is the latest act of arbitrary harassment against members of Living Stone Church. Targeting and confiscating the funds of the church accountant appears to be a tactic designed to cripple an entire congregation which has been targeted by the authorities because it refuses to register under the state-sanctioned Three Self Patriotic Movement. Some members have also provided advice and support to other churches facing pressure from the authorities. We call on the Chinese authorities to release Zhang Xiuhong and Pastor Yang Hua, and to respect all Chinese citizens' right to freedom of religion or belief."