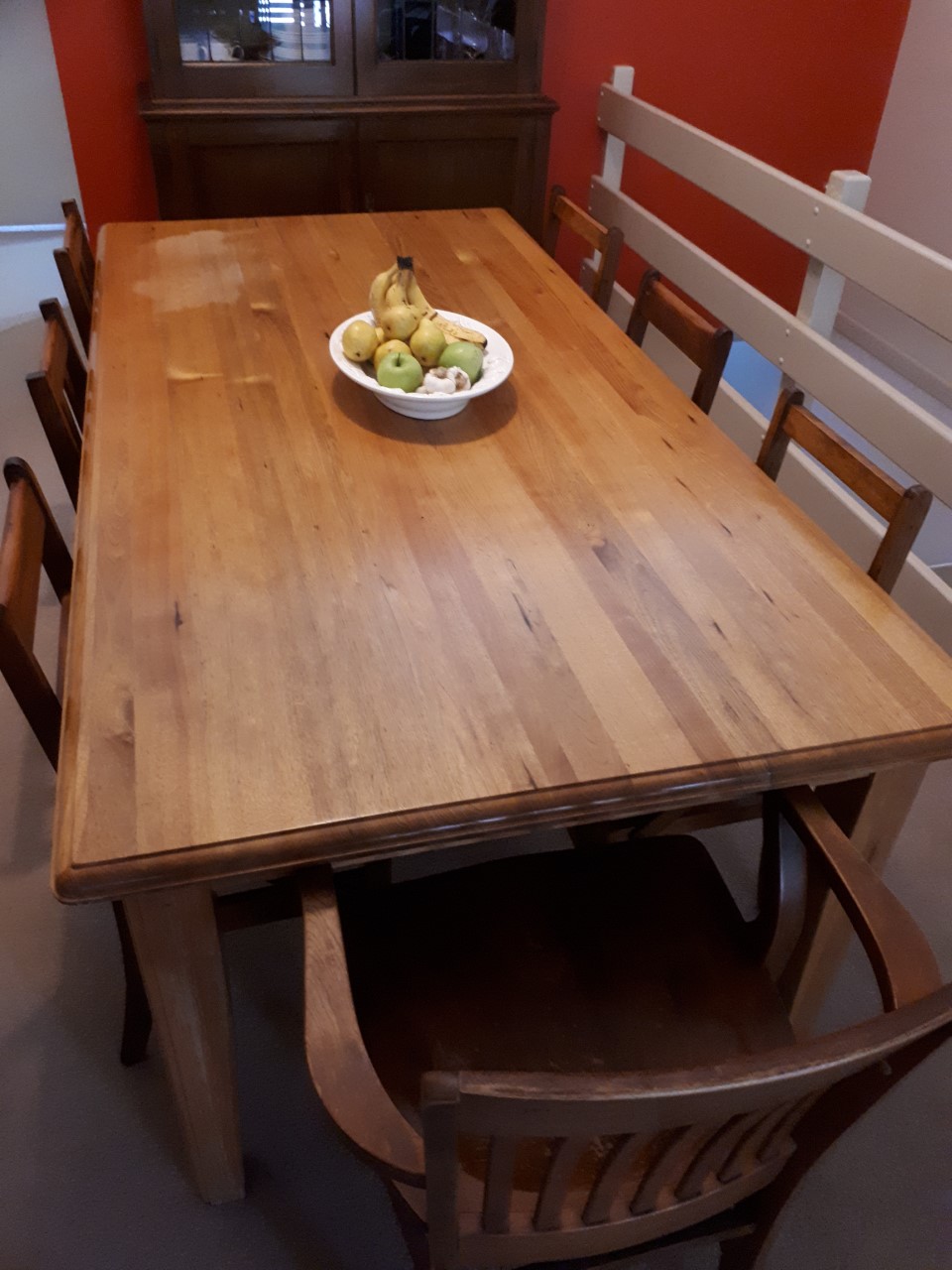 The picture adorning this article is of my dining table. Why? Because this table represents for me where I began to take seriously what Paul says about contentment.

Most Christians, when reading the title and opening sentence of this article, will know exactly what I am talking about. In the eminently familiar passage of Philippians chapter 4 verses 12 and 13 Paul makes this astounding claim:

Whilst I have always known that Paul makes this claim about contentment, I never actually took it seriously, nor took it as a challenge to my own life, until fairly recently when my wife and I were shopping.

Now, I’m sure there are other husbands who have had epiphanic spousal shopping trips where they have challenged their significant other to simply “be content” with what she has, just as Paul says in Philippians chapter 4 (I say ‘other’ husbands, of course, as I would never say such a thing to my good wife…)

But on this particular outing it was I, not my helpmeet, who was struck by this prophetic challenge. For as I longingly looked upon a beautiful dining room centrepiece, I realised… I already have a perfectly good dining table.

As you can see, my kitchen table is not ‘perfect’ in the traditional sense. It shows signs of age, water damage, and damage by nail polish remover (which, by the way, works excellently as wood varnish remover too). But it is fit for purpose, and, according to my puny arms during the house moving process, is very solid.

Right there in the showroom of a furniture store, The Lord said to me “Do not merely listen to the word, and so deceive yourself. Do what it says” (James 1:22).

The cultural command of consumerism

James 1:22 is my life verse, and so many of you will not be surprised that this is the passage the Lord used to challenge me that fateful day. Yet the challenge rings true: The Word of God tells us to be content instead of being sucked into the cultural command of consumerism (there’s a string of alliteration that would make Judah Smith proud!) Hebrews Chapter 13 verse 5 says,

5 Keep your lives free from the love of money and be content with what you have, because God has said,

The culture that I live in is driven by consumerism: a preoccupation with showing one’s affluence through the acquisition and consumption of material goods in ever increasing amounts. The rich and the powerful show their wealth by spending money liberally, replacing items for fun rather than necessity.

But God says (through the author of Hebrews), “be content with what you have.” Why? “Because God has said, ‘never will I leave you; never will I forsake you.’” How? Well Paul says in Philippians chapter 4 verse 13 “I can do all this (be content in every situation) through him who gives me strength.”

Contentment through Christ who gives us strength

So what precisely does it mean to say that we can be content through Christ who gives us strength?

For starters, it’s not a magical, omnipotent platitude that we can ‘name and claim’ through gritted teeth, activating the power of Jesus in any given circumstance (once, as a pastor, upon asking a congregant which spiritual gifts they possessed, I was told ‘all of them, because Philippians 4:13’).

In the context, Paul is saying that he can be content in any situation because of the abiding sense that Christ is sufficient. The secret of being content (as Paul calls it in verse 12) is knowing that Jesus is so beautiful, wonderful, and valuable, that the things of this world have no effect you.

Jesus doesn’t give Paul strength through some kind of cosmic transference of might, Paul has strength because he has Jesus. He doesn’t help us to win the running race, he makes the running race unimportant by being matchlessly important (Of course, Paul does talk about how Christ gives us supernatural ability to “press on towards the goal” in Philippians 3, I just don’t think that’s the concept he speaks of here).

A fancy kitchen table, simply bought for the purpose of looking impressive? It doesn’t (or shouldn’t) matter, because I have Christ.

So be content with what you have, be it little or a lot! Because what we have frees us from the oppression of consumerism.

As Christians, we no longer have to seek fulfillment or comfort in having an abundance of pretty trinkets and shiny things, sure to ultimately prove worthless and empty. We have Christ! Stop the search, friends, we have found the treasure and the pearl (cf. Matthew 13:44-46).