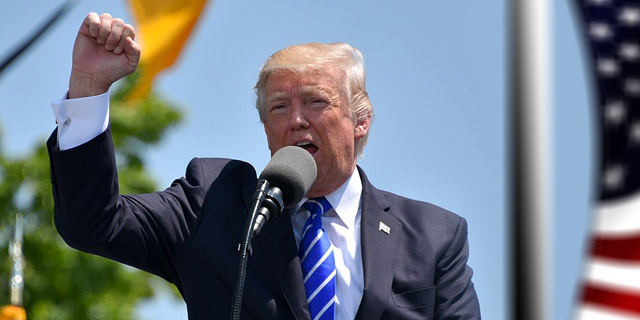 President Donald Trump boasted on Thursday that Americans are once again saying "God" and "Merry Christmas" thanks to his administration.

He told religious leaders at the National Day of Prayer ceremony at the White House that his administration had made religious liberty a priority and that Americans were "proudly" coming together as 'One Nation, Under God' again.

"People are so proud to be using that beautiful word, 'God,' and they're using the word 'God' again," Trump said.

He went on to claim that under his administration, it had become more acceptable to say "Merry Christmas" instead of "Happy Holidays".

"When I first started campaigning, people were not allowed, or in some cases foolishly ashamed to be using in stores, 'Merry Christmas,' 'Happy Christmas.' They'd say 'Happy Holidays,'" Trump said.

"I always said you're going to be saying 'Merry Christmas' again and that's what's happened."

Vice President Mike Pence spoke to guests about the place of prayer in the White House.

"Since the founding of this nation, the American people have believed in prayer. It is the thread that runs through every era of American history," he said.

"I can assure you, at a time when religious belief is often marginalized and even ridiculed, in this White House, under this president, we believe in prayer."

Rabbi Yisroel Goldstein told guests that he had been "forever" changed after being wounded during a deadly synagogue shooting in California last weekend.

"I should've been dead by now based on the rule of statistics. I was in the line of fire, bullets flying all the way, my fingers got blown off, but I did not stop," the rabbi said.

"My life has changed forever, but it changed so I can make change, and that I can help others learn how to be strong, how to be mighty and tall. "