I'm heading into the last few months before turning 30 and beginning to reflect on the last 10 years of my life. I'm realising my twenties were not easy. I've had some epic adventures in the last decade, travelled the world and learned more about God and myself than I thought possible, yet the last 10 years haven't come without their fair share of challenges.

I often felt like I was at war with myself and with the world around me, not because I was a rebel and saw the world as my enemy, but because it just seemed that I had to choose to fight every day to stay afloat, to not go down and give in, to continue to follow God and learn how to persevere.

And it often felt like the person sending me into battle day after day was God. It felt like He was asking me to fight so hard, for everything and everyone in my life and it seemed as though He was content just to stand by and watch me sweat, watch me fight and get wounded, then ask more of me.

Then God shifted my perspective one day. I was reading the book of Joshua. In this book, God sends the Israelites into battle over and over again to conquer the Promised Land. In Joshua chapter 10 the Israelites were going into battle against the Amorites on behalf of the Gibeonites.

Earlier in the book, the Israelites were tricked into making a treaty with the Gibeonites. They were deceitfully sucked into the treaty because they failed to inquire of the Lord, so technically the Israelites had gotten themselves into this battle and deserved to be there.

After marching up to the city at night in verse 9, The Lord throws the Enemy into a confusion which allows Israel to gain the victory. Israel continues to pursue the Enemy as they flee the city and in verse 11 it says, "As they [the Enemy] fled before Israel...the LORD hurled large hailstones down on them from the sky, and more of them died from the hailstones than were killed by the swords of the Israelites."

After I read this, the Lord whispered gently to me, 'Laurinda, I always fight harder than you do." God had killed more Enemy soldiers by throwing them into confusion and throwing down hailstones than Israel's soldiers had. I had never seen this before.

In the past, I saw God sitting on the sidelines asking me to push harder, and go faster. But this story changed everything for me because I could see myself and my own story through the Israelites. They had gotten themselves into this mess and deserved this battle; God wasn't obligated to come and save them or fight for them here.

The Israelites went up into battle, but instead of God sending them alone, He went with them and did most of the hard work for them. Then in the end, Israel got the credit. Instead of seeing God on the sidelines asking more of me, I saw God choosing to go into battle with me and fight harder than me.

God fights with us

I believe this is true for every challenge we face. We feel like life is an uphill battle that we will never be able to fully conquer and God is passively watching from the sidelines, occasionally cheering us on, but content to let us get involved instead of Him. Yet the truth is that God sends us, but He goes also goes with us, not only to monitor our progress and tell us how to improve, but to fight for us and with us!

That person you've been praying for so long, do you realise Jesus is interceding (praying) with you at the right hand of the throne of God? Do you believe God loves them more than you do and is fighting too?

That challenge you've been facing for so long and in which you feel so alone, you may even feel like God has abandoned you, but this is a lie from the Enemy.

God is with us. He sends us into battle because He knows we need to learn how to fight and stand in victory ourselves instead of Him fighting battles for us. He knows we need to gain spiritual muscle and build our character; He really does know what's best. 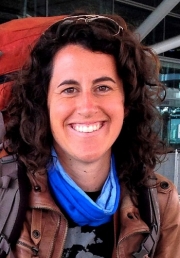 Laurinda is a missionary at Youth with a Mission in Brisbane where she leads a discipleship program for young adults. On her day off you can find her hiking up a mountain or swinging in a hammock.

Laurinda Rapp's previous articles may be viewed at http://www.pressserviceinternational.org/laurinda-rapp.html