Known as the “Apostle of the Nations”, Saint Paul was one of the greatest figures of early Christianity. A prolific writer and scholar, Paul travelled extensively, planting churches wherever he went. Details of Paul’s life can be derived mainly from the 14 letters he addressed to Christians living in different regions during his time.

Paul was born in Tarsus of Cilicia (modern day Turkey) in the early 1st century AD. His parents were Jewish. They belonged to the tribe of Benjamin and the sect of the Pharisees. Paul’s native language was Aramaic, but he learned Greek, the language of commerce and literature in the Roman era during his lifetime. Paul studied under the great law teacher Gamaliel and became an expert in Jewish theology and law.

Paul learned the art of tent making in order to earn his livelihood. In his younger years, he was a relentless persecutor of the Christian Church, ravaging and invading homes, forcibly dragging men and women to be thrown in jail. He also participated in the stoning of the protomartyr Stephen, one of the seven leaders who distributed food to the poor in the early church.

During his trip to Damascus, Paul had a dramatic conversion to Christianity after personal encounter with Jesus. It marked the beginning of his 180-degree turnaround from persecuting Christians to preaching Christianity to the nations.

Together with Barnabas, nicknamed “Son of Encouragement”, Paul embarked on his first missionary journey in 47 AD. The two left Antioch of Syria for Cyprus then onto Perga in Pamphylia, an ancient Greek city in Asia Minor.

The next stop was Pisidian Antioch (note different to the first Antioch) where many believed in the Gospel. They continued their journey in Iconium, Lystra and Derbe, before returning to Antioch of Syria by ship. In all places Paul visited, he proclaimed the Gospel and established churches. 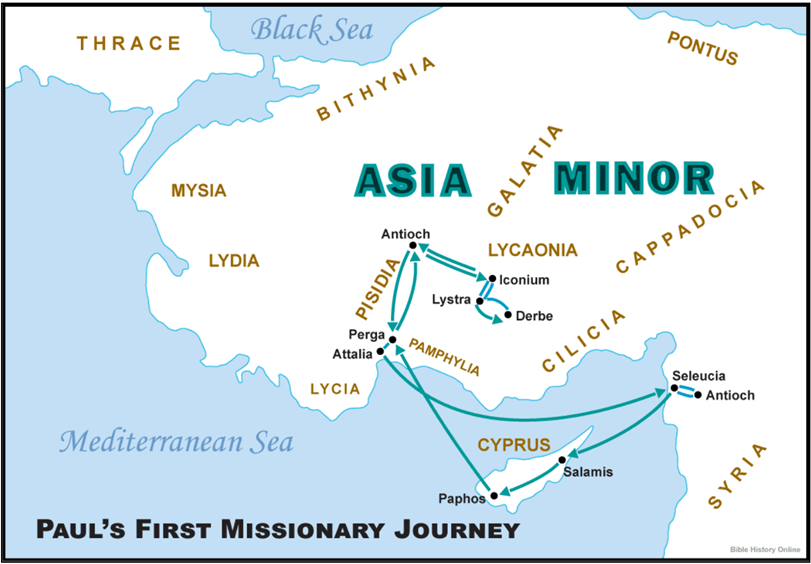 Paul began his second missionary journey with another companion, Silas, in order to support and encourage the churches that had been established from the first journey. Paul visited Lystra and Derbe once again then went to Troas (Troy). While in Troas, Paul saw a vision of Macedonian who begged him to “come and help us”. He boarded a boat and sailed straight across to Greece.

When Paul reached Philippi, a major Macedonian city, he met Lydia from Thyatira, a merchant of expensive purple dye. Lydia believed in the Gospel Paul preached and became the first Christian to be baptised on European soil. Paul and Silas endured a brief spell of imprisonment before travelling to Thessalonica (Thessaloniki). There some Jews became jealous of Paul and caused a riot to kick him out of town.

Paul headed southwest to the city of Berea (Veria) where people were more open-minded than those in Thessalonica. They listened eagerly to Paul’s message and searched the Scriptures daily. As a result, many Jews and Greeks believed the Gospel.

Finally, Paul went to Athens and Corinth and preached there, before returning to Antioch of Syria. The below video is his famous preaching in Athens.

After Paul arrived in Ephesus, he went to the synagogue and preached boldly for three months. He headed to Caesarea, visiting Jerusalem, Antioch, Galatia, Phrygia, Colossae, Laodicea and other provinces of Asia Minor to support the established churches and plant new one.

Paul returned to Ephesus and remained there for three years. During his stay, he preached in the synagogue, baptised many Christians and performed unusual miracles. He then visited Macedonia and Greece again to encourage the believers in all the towns he passed through.

On his journey to Jerusalem, Paul met with the Ephesian elders in Miletus and encouraged them to remain faithful to the Gospel as they would not see him again. In Jerusalem, Jews rejected Paul’s message. Bound and whipped, Paul endured a trial and stayed true to his conviction, even preaching to his interrogators during the trial. 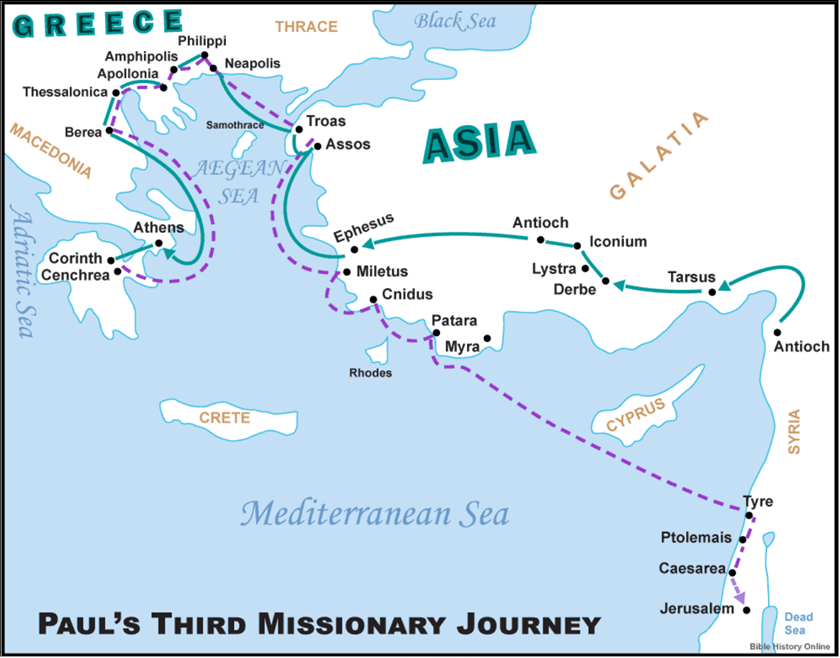 The End of Paul

When the time came, Paul sailed for Italy and stayed in Rome for two years awaiting trial. He was detained under house arrest but accompanied by his faithful companions; Luke, Timothy, Mark and Aristarchus. People from all over came to the house to listen to Paul’s preaching. Paul also devoted much of his time writing letters to the Christians, namely letters to the Colossians, Ephesians, Philippians and Philemon.

With Paul’s stay in Rome, the narrative of the Acts of the Apostles ends. Details of post-trial events are unclear but tradition says he was released and made a fourth missionary journey before returning to Rome. Then during the period of Nero’s persecutions, Paul might have been accused, arrested again and finally beheaded.

However, it is worth noting that the tradition account about the end of Paul is a speculation. There is no conclusive historical or biblical evidence. Therefore, it is still possible that Paul might have done further things that are not recorded in the Bible and died in another way – even peacefully.

Regardless of how Paul finished his ministry on earth, his legacy continues to impact millions of Christians worldwide to this very day. Of the 27 books of the New Testament, 14 have been attributed to Paul. A brilliant theologian and writer, Paul was and is indeed the “Apostle of the Nations”.

“But my life is worth nothing to me unless I use it for finishing the work assigned me by the Lord Jesus, the work of telling others the Good News about the wonderful grace of God.” – Acts 20:24.