What we know from historical accounts is that the 1600s did not seem like the greatest century to be living in Europe. As the Black Plague ravaged nation after nation, sweeping through with little regard for class or culture, a 38-year-old man began to cough and splutter. Bed-ridden and fearful of death, he listened as the church bell announced each new victim of the disease, awaiting his turn.

Two months later, he experienced a dramatic recovery from death’s door – only in time to witness his 18-year-old daughter contract the contagious killer, suffer and die an agonising death in the presence of her father.

In light of these experiences, John Donne penned his famous A Nocturnal Upon St Lucy’s Day, as both a memory of his daughter and as a way to process his grief. In the midst of this sombre ode, Donne wrote the haunting words,

Of absence, darkness, death: things which are not.

Donne’s imagination was consumed by despair, and his pen bled black prose, explaining that his identity and dreams were now re-created by loss, darkness and death. He couldn’t dream, he couldn’t hope – all he could think about was an on-going continuation of the misery that surrounded.

Three hundred years later, as Nazi Germany became the new destructive force in Europe, a young Viennese psychiatrist named Viktor Frankl found himself confined in one of the Jewish extermination camps. As he witnessed the atrocities around him, he noticed a profound truth among all the prisoners. Many prisoners did not die because of beatings, over-work or direct physical causes. Instead, many of the inmates passed away from a lack of hope.

In his fascinating book Man’s Search for Meaning, Viktor Frankl writes, ‘The prisoner who had lost faith in the future - his future - was doomed’. A prisoner would simply wake up, give up hope and refuse to get out of bed – no matter how many threats or beatings were made. Usually, according to Frankl, within 48 hours they would expire, dead from a loss of hope in the future.

Although most of our circumstances are not in the same scope as Donne’s or Frankl’s, many of us have experienced the same effect of hopelessness on our imaginations. Consumed by an addiction that we cannot shake, we resign ourselves to our future always being trapped in an unending cycle of destruction. Facing physical or mental disabilities, we cease to dream of a life of hope and possibility. Confronted by chaos and oppression, all we see is more of the same.

Growing up in Sunday School, we were always taught about sin being a black spot on the heart that made God sad. Although this is helpful for teaching children, this view ignores the fact that sin – an unpopular word in today’s culture – is inherently dehumanising. Greed, gluttony, pornography and pride – each of these aspects of broken creation blind, bind, deafen and deaden the imagination, and work to trap their victim in a never-ending prison of hopelessness.

The Israelites, when taken into captivity into Babylon, were jeered by their captors to sing them songs of their old land and regale them with tales of life back in Judah. In their captivity – in a land free of imagination – all they could do is lament and grieve – ‘How can we sing the songs of the Lord while in a foreign land?’ How can they imagine, how they can hope – when sin has deadened their dreams?

Yet when we turn further back in the Judeo-Christian story, we are confronted by a scene of creative hope. In the earliest pages of the creation narrative we read that this God spoke over a earth that was formless, chaotic and empty – devoid of life – and brought newness, flourishing and beauty forth with a word. This God chooses infertile couples to be the beginnings of new families and turns a prisoner into the Prime Minister of Egypt. With this God there is always hope, always imaginative possibility.

Leadership consultant Sharon Parks Dalaz states in Common Fire that ‘The work of the imagination is to create the real’. This observation stands as the antithesis of Donne’s lament, that he is being re-created by things ‘that are not’, with imagination being a powerful catalyst for change. When we are interrupted by the God who always speaks hope, suddenly our imaginations are re-sparked and our dreams re-ignited, allowing for new possibilities to spring forth.

After the restoration of Jerusalem from captivity, the Psalmist wrote these evocative words, ‘When the Lord restored the fortunes of Zion, we were like those who dreamed!’. When before there was weeping, now there was dreaming! Hope had broken into the dry dusty land of Babylonian captivity and now the Jews were free to dream again.

This does not mean that Christians are those who whistle in the dark, ignorant of the evils and disappointments of the world. Those who follow Jesus should perhaps be the first to mourn and lament the hurt that surrounds, as they are also the ones who know the potential of what things could be. Imagination does not turn a blind eye to the disappointment of today. It sees what is, it mourns and laments, but then speaks a bold new word of hope into a hurting situation.

Although I have never suffered from the bubonic plague or been imprisoned, I know what disappointment and hopelessness feels like. This is not because my life has been especially painful, but that disappointment is part of the human condition. Failed relationships, bad decisions, false hopes and waylaid dreams - as painful and unique as they feel to me, they are common, with everyone having their own story of seasons of despair. In such times, it is difficult to imagine a different reality, and easy to resign ourselves to a bleak outlook on life.

In the midst of such times, we do well to remember the two cries of the Biblical narrative. First, ‘How long, O Lord?’ – The cry of lament, the cry of suffering which echoes throughout the narrative; the cry of loneliness and hurt that came from the cross – from the lips of Christ himself. Pain, disappointment and death are real. They hurt. They blacken our imaginations.

But the second cry rings out over top – the victorious song that ‘He is risen!’ Throughout the darkest moments and the most hopeless situations, we recall and remind each other that death doesn’t win.

The grave does not get the last word. Hope reigns and beckons our imaginations on, to a future that is just around the corner – a future full of life, love and eternal colour. 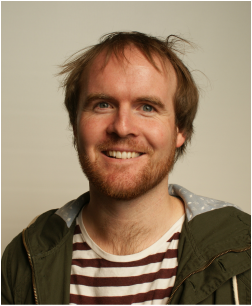 Jeremy is a student and Innovation Consultant (www.jeremysuisted.com) who once had their car hit by a dog.

Jeremy Suisted previous articles may be viewed at

Jeremy Suisted is from Cambridge NZ a Creative Consultant and was once voted in the Top Six Waikato’s Hottest Muffin Bakers.