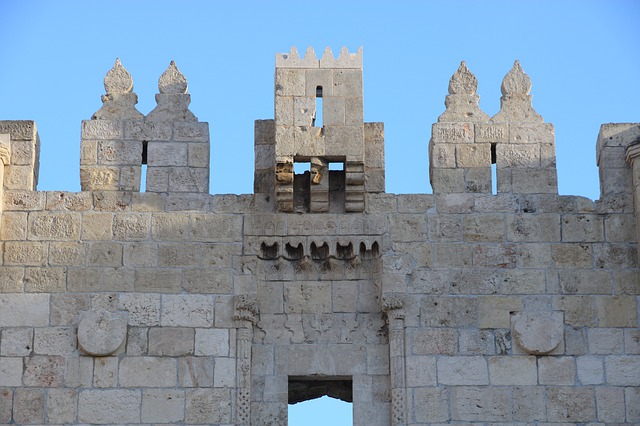 On the road to Damascus, surrounded by mountains, lies a village soaked in cool air and dappled sunlight. Here, birds sing from olive trees that cast soft shadows over the courtyards of ancient monasteries.

Legend has it that St Tekla, the daughter of a pagan prince and disciple of Saint Paul, fled to these rugged mountains in the first century to escape persecution. Her way was blocked by jagged rock. With those who threatened to kill her in pursuit, she fell to her knees and cried to God. The tale goes that in response God parted the mountains for Tekla, so she could hide in one of the many caves. And thus, the place where she took refuge is still called Ma’loula today, which in Aramaic means ‘entrance’.

Even though this story enters the realm of myth, the caves of Ma’loula have provided cover for persecuted Christians throughout the centuries. The village is home to one of the oldest Christian communities in the world. Nuns live side by side with their Muslim neighbors in peaceful tolerance. Ma’loula is one of only three villages where Aramaic, the pre-Islamic language of Syria, is still spoken. Aramaic was the language of Jesus.

When the war began

The inhabitants of Ma’loula wanted nothing to do with the Syrian civil war that raged around them. But even this oasis of peace was not exempt from the chaos. In September 2013 a Jordanian suicide bomber blew up a truck at the village’s entrance, killing eight people. Two months later, 12 nuns were kidnapped by the rebels. Then in 2014, the sound of machine guns echoed off the mountains as the rebels, who for months had occupied St Sergius monastery, were driven out by Syrian government forces. During the violence UNESCO listed churches were burnt, crosses were shot at and Christian villagers held at gun-point, forced to convert to Islam. Not even this mountain hide-away has been exempt from the horrors of a war which has displaced 12 million people and left half a million dead, becoming the greatest humanitarian crisis of our times.

This March marks the seventh year of conflict in Syria, which began in 2011 with a group of school kids and graffiti. Inspired by the 2011 Arab Spring, which swept across the Middle East in a series protests and uprisings, teenagers from a town in southern Syria decided to write anti-Assad government slogans on a wall at their school. They were arrested, beaten, tortured and thrown into prison. Peaceful protests began as citizens demanded the release of the children — the people wanted torture, paranoia, and political corruption to end, and so shouted for freedom. In response to the protests, Syrian police fired at the crowds. But the protesters fought back. Soon, a fully-fledged war had broken out between the Assad government and those who called themselves revolutionaries. Today the conflict has snowballed into a complicated war-zone involving foreign parties, each with their own agenda. Syria is burning, but those flames could easily ignite the entire Middle East.

The current crisis is the siege in Eastern Ghouta, north of Damascus. Government forces, backed by Russia, are attacking this rebel held area with chlorine bombs, barrel bombs and rocket shells. It is now March 2018 and close to 800 civilians have been killed in the one month since the siege intensified in February. Thousands more are trapped, starving and without medical assistance. The destruction of Ghouta can be seen from space.

When we read in Acts about Paul travelling the road to Damascus and encountering the light of heaven, we see ourselves in this account. Like Paul, Jesus has shone his light into our darkness and saved us. This is a powerful and personal interpretation. But I like to think that when Jesus met Paul on a road in the Syrian desert, he did so because he looked ahead and saw today.

He saw blood and bombs. He heard children’s screams. Held mother’s tears. Longed to comfort tortured and abused souls. And pined for the rain of his Spirit to soothe this searing land. On the road to Damascus Christ unveiled his light to a man on a mission to kill people in Syria. Outside Damascus, Paul gave his heart of hate to Christ, who gave him God’s heart of love. And this zealous persecutor became God’s missionary. The Gospel reached the world because God did something radical to one man’s heart, in Syria.

There are seeds of Christ planted in Syria. In Genesis, God set apart a Syrian woman, Rebekah, to be the mother of Israel. In the gospel of Matthew, Jesus heals everyone from Syria who came to Galilee to hear him preach. In Acts, we discover that believers were first called Christians in Syria, and it was here that Paul and Barnabas were commissioned by the church to take God’s message of salvation to the nations. Syria is still part of God’s plan. For upon a wooden cross of torture, Jesus carried the brokenness of this nation. Our Saviour spilt Middle Eastern blood, on Middle Eastern sand, for the salvation of every Middle Eastern soul. Such suffering I cannot understand. But I can pray, like Saint Telka, for God to move mountains so his people can find eternal safe refuge in him. May they find a Ma’loula for their souls — a holy ‘entrance’ into a peace that transcends all understanding.

Amy is a photographer / videographer from Adelaide. A portfolio of her work can be found here: www.vimeo.com/littlelightcreations