It was half-time during a professional rugby league game. A player broke down and told the club chaplain that his life is in shambles – a troubled marriage, excessive drinking, crumbling on-field performance and sustaining a serious injury during the first half. His whole world came crashing down. It was all too much to bear.

They sat under the live broadcasting area but deliberately out of view of the camera. The player told the chaplain that he needed to get God at the centre of his life and asked him how to do it.

In that moment the chaplain shared the life-changing message of the gospel and they prayed together. This event marked the beginning of a life turned around, family and marriage restored. The rest is history.

Phil Pawley, CEO of Sports Chaplaincy New Zealand, recounts this experience during his time in the UK and calls it “the game of two halves”. A transformed life is the most powerful witness that does not require many words. It speaks for itself.

More than a Game

No matter where we are, there is one question we can always count on hearing: “Did you watch that [rugby, cricket, soccer …fill in the blank…] game?” Sports are so prominent in today’s culture that have become common topics in many situations. Sports have power to go deeper than what we do, they speak to who we are.

Many people begin playing or watching sports with a love for the game but often end up turning to it for identity, meaning and even salvation. Sports begin as a ‘gift’ can easily evolve into a sort of ‘god’. It is perfectly fine for people to identify themselves by the sport they love or play. But a sport alone cannot bear the burden of defining the core identity of a person.

Although sports are not an organised religion, they are religious in nature. It is a channel of transcendence. When sportspeople and fans are “in the zone” (sociologists call this “flow”), they are having a spiritual experience that begin with their physical body but connects them to something beyond the physical realm – an experience akin to worship in a religious service.

That said, the benefits of sports in a proper place are numerous: enjoyment, creativity, peace of mind, better health, social skills to name a few. The word “competition” comes from the Latin competito meaning “to strive together”, rendering sport a mutually acceptable quest for excellence. It requires cooperation and respect.

In his article More than a Game: A Theology of Sport, Jeremy Treat sums it up this way: “Sports are more than a game and less than a god, but when transformed through the gospel can be received as a gift – a gift to be enjoyed for its intrinsic worth and stewarded for the glory of God and the good of others”.

Gospel in a post-Christian world

In most of the Western world where Christianity had previously flourished, the Christian worldview is in decline in favour of secularism. In the post-Christian world, Christians should not simply think that they have God-ordained ‘rights’ to preach the gospel to the ‘religious others’ without building credibility and trust.

Instead of telling people what to do, we first need to provide a listening ear, practical help and prayer for those who are going through suffering and hardship. These are not always easy and may take long time. But our genuine love, respect and care for people will lead us to earn credibility and trust as well as opportunities to share about things of God.

Jeremy Dover, a PSI senior writer and sports chaplain in Australia, wrote a thought-provoking article back in 2013 titled “The next revival? Chaplaincy: The new reformation”. The difference between the church and chaplaincy Jeremy highlighted is that the former invites people to come to them while the latter goes out into the community.

Chaplaincy takes love and care of God outside the church walls. As chaplains connect with sporting communities, they have the opportunity to clear the clutter built by previous ‘Christian activities’ and translate the gospel in a language that people can understand. In doing so, chaplains not only provide social care but to reconnect with the trajectory of God.

Enroy Talamahina is the Sports Chaplain for Kelston Boys High 1st XV and Vodafone Warriors U20s team. He was also an Engage Chaplain for the 2011 Rugby World Cup. Enroy says that sports chaplaincy combines his love for God, heart for people, desire to encourage others and his passion for sport.

My own journey as sports chaplain started with watching the below 3-min video about Enroy. I subsequently trained through Sports Chaplaincy New Zealand (SCNZ) and became an accredited Sports Chaplain with SCNZ. 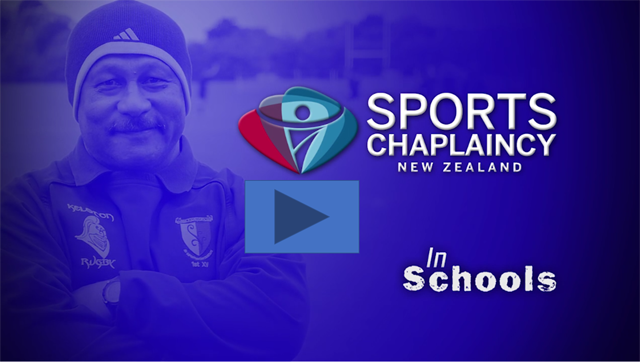 Trained sports chaplains on the ground are in short supply in New Zealand. If anyone is interested in becoming a sports chaplain or would like to know more about the work of SCNZ, please visit the SCNZ Website: http://sportschaplaincy.co.nz/