“Do not follow where the path may lead. Go instead where there is no path, and leave a trail.” Ralph Waldo Emerson

Despite the less than generous rating which Rotten Tomatoes gave this movie, I decided to go along and see “The Bookshop” at a local cinema one cold winter’s evening. Admittedly, I am inclined to take some interest in any movie that revolves around the glorious world of Bibliophilia, and this screening was further intriguing for me due to its Spanish, female director.

The story is set during 1959 in a small English town, which is content in being unchanged and unmoving in its opinions, social hierarchies and complete lack of depth in any relationships. A young widow, Florence Green, moves there for a fresh start and is thrilled at the opportunity to open a bookshop – the first in the town – which she hopes will be a vibrant and growing place for all ages and wages.

Little does Florence realise she is about to face “polite but ruthless local opposition [IMDB review]” from the very people she hopes to befriend and nurture with her generous heart and open love of books. Through careful manipulation and heartless cloak-and-dagger dealings, the local town matriarch manages to pass a bill forcing the bookshop to be closed in favour of a more “fashionable” arts centre, and Florence is consequently evicted from her home and her dream.

While I acknowledge that the movie itself strolled along at the pace of a solitary beach walk, with only a few key persons gaining enough screen-time to delve into their deeper characters, nevertheless the tale of Florence Green gripped me.

Florence spends the majority of the movie as the misunderstood bearer of quiet sadness and never-ending injustice. Her husband has been taken from her by a cruel war. Her hard work and efforts to bring joy and enlightenment to others are met with ridicule and scorn.

Blow after blow is aimed her way, and in the end her castle comes crashing down.

But she does not.

And that, I think, is what makes her simultaneously heroic and yet relatable. Tragedy seemed determined to mark her, and mark her it did. Yet her inner core never wavered from its tenacious essence of quiet strength and never-ending grace.

Many of us are all too familiar with the harsh reality of “polite but ruthless opposition” from those around us.

Being labelled as either “youthful impulsiveness” or “old news”. Being unjustly represented in a public meeting. Being the unwilling centrepiece of plain old-fashioned gossip or the unprepared kicking post for other’s frustrations.

There is something quite demoralising about the ongoing message of a community that simply doesn’t believe in you.

Just ask Florence. She was belittled, gossiped over, blatantly tricked and disproportionately discouraged to her face. And that was before they shut her down.

But in case you think the moral of this monologue is “don’t be a rotten tomato”, that’s really not what I’m getting at. Most people are kind. A great number of people are not. We really can’t do much about this except to choose which type of person we will be.

But what made Florence so real and powerful in the face of such personal attack was the one thing about her that no one could evict or destroy: her courage.

This is what reigned strong and true within her, no matter the opposition or injustice she faced. The theme is even woven into the opening scenes of the movie with this classic narration:

Why? Because “She had fulfilled a dream, and they had taken it away from her. But what they could not take away, deep down inside her, was courage.”

A life of courage

Florence had a cruel deal, no question. But despite all the chaos and hurt that was battering her wounded heart, she never lost her inner passion and wonder, her unconditional kindness and self-worth.

She never let go of courage.

This was her life to own and live, and no one – nope, not even old Mr Potato Head – could touch such a pure and powerful core.

I have yet to read the novel on which this movie was based, so I don’t know the final redemption of Florence Green. I like to think that she spent some time healing her wounds and letting her tears fall freely and honestly.

I like to think she shook out her courage and draped it across her form once more. I like to think she threw aside any current opinions or discouragements, and remembered again that she was made of stronger stuff than meets the eye.

I like to think that, once again, Florence Green opened a bookshop. 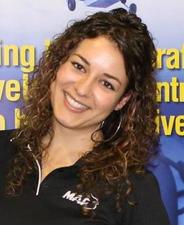 Emma is an Italian-South African with a New Zealand passport,

living in Papua New Guinea. As well as years of running a puppet ministry and directing student choirs, she has served with Mission Aviation Fellowship since 2007, currently based in PNG. Emma's deep joy is in writing, music, playing with her ginger cats and finding God in unexpected places.