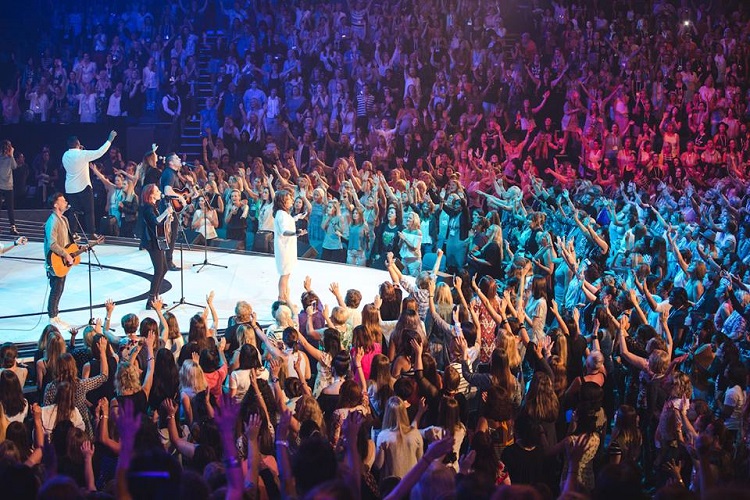 It was early one Sunday morning, when he (we’ll call him John) walked slowly, but steadily along the steep footpath leading towards the iconic Storey Bridge, whose imposingly concave arches join the east and west banks of the Brisbane River.

Life is hard for some, and for John in his state of inconsolable grief, it was too hard. With nowhere to turn, the only way out it seemed was to jump off the bridge to his death (the bridge is a notorious location for suicide).

However, as God had so ordained, in order to reach the bridge, he must walk directly past Hillsong Brisbane Campus (which meets in the local Art-House theatre)

At 8.00am on a Sunday morning, when most shops and churches are shut, Hillsong is open. Young Christians stand outside to invite passers-by in, for a free coffee in the lounge and a chat.

John’s plan to suicide from the Storey Bridge was interrupted, by a friendly smile, and an invitation for a coffee. The rest is history, God spoke to him that morning through Pastor Houston’s message, and the love he received from the Christians who surrounded him.

Thanks to Hillsong, he is now an active member of that Church, and has a temporal and eternal future. This was the heart wrenching story, we heard from our ‘meet and greet Hillsonger’ (we were visitors) as we chatted over coffee before church.

As I talk with my brothers and sisters in the Lord (as one does on occasions), I’m always shocked and humbled by the disparaging remarks made about Hillsong. Shocked to hear my brethren be so dismissive of Hillsong, and humbled because there go I, but for the grace of God. For I too was once a naysayer.

They rail against the alleged prosperity gospel preached. They complain he’s too worldly and the members unchaste. Focused on entertainment, and not the deep things of God. On further questioning it becomes immediately apparent, they’ve not listened a single message, nor have they met any members of Hillsong. Their criticism is based on hearsay, and therefore mean spirited ignorance.

Is that a Log in your Eye, or a Spec in Hillsong’s

Is your Church open from 7.00am every Sunday morning? Are you standing outside inviting people in? Has your church even given a thought to having an invitation ministry on a Sunday morning?

I bet the answer to these questions is No. So how can you take seat of judge or juror?

The successes of Hillsong and its ministries are too many and varied to iterate here. So rather parade its success under God’s might hand, I’d like to focus on a couple reasons, which explains why they’ve been so successful.

Firstly, they have an open heart for people and to God. They love God and they love people. Sounds oddly familiar, Jesus said something like ‘You shall love the Lord your God ……and your neighbor as yourself’. For Hillsong this is not just a dry, dusty doctrine, they live it. You can see this principle at work driving all their programs to the unsaved community.

Secondly, Pastor Brian uses ‘seeker friendly’ language. Now he could use the customary parlance of Pastors and Priest, which would win the approval of the mainstream, but alienate ordinary people with no Christian jargon. I challenge you to listen any message (which you can download for free on podbay) and find ‘Christian terms’, I can guarantee that you won’t find one.

Thirdly, they openly ask for your tithe. ‘Oh no! I don’t want to give that much…’ I hear you say. What’s worth more to you, your overseas holiday, the new golf clubs, the status statement of a new car, or giving back to God, for the blessings he has generously showered on you?

God’s cause languishes in many mainstream Churches, because His people don’t give generously. Hillsong beams the message of hope, to be found only in

Jesus Christ to millions of people across the globe, it reaches into prisons, villages in Fiji and beyond. And God’s message doesn’t return to him void. Hundreds of people are being saved and blessed. But you can’t run a global broadcasting ministry on the widow’s mite. Consequently they unreservedly ask for money to fund their ministries, so God can pour out blessing, and he does. I’m living proof.

Fourthly and finally, Hillsong is a brand, not a denomination, unlike our mainstream churches, which exist because of some schism over some difference of opinion on doctrine. In that sense they are historical relics of a theological debate in centuries past. The Baptists and their believer’s baptism, Pentecostals and speaking in tongues, Presbyterians and church polity or whatever.

Hillsong is none of these

It’s a vision predicated on an expectation of what an omnipotent God can do now, through his church, to bring blessing and hope to a lost world. It’s greater than a doctrine and it can’t be defined strictly. It’s a feeling of empowerment to those who belong to it.

It rises above the crass evangelical notion of ‘getting saved’, a type get into heaven ticket. Instead it inspires believers to see that they are emissaries of an Almighty God, who loves you passionately and to whom you are infinitively important.

And He has written an individual life- plan for you to follow. Step into that plan – be proud, God is on your side and rejoice.