We often find it hard to comprehend how a seemingly godly non-Christian is in fact ungodly. Romans chapter 8 says, "Those in the flesh cannot please God." We see this as unjust. Clearly, my non-Christian neighbour should be saved if they're lovely!

This question came up with a friend while we were reading the Bible. A helpful story came to mind. May it be a help to you when these questions plague you or one of your friends.

Sarah hit her alarm clock at 5am. She really wanted to keep sleeping, counseling a grieving friend late at night was quite draining, but she got up anyway. Getting on her bike she rode down to the homeless shelter, where she helped distribute food to those in need.

At 7am, she was at the local hospital, beginning her shift as a nurse. She took on showering and helping toilet patients because she knew it was the right thing to do. She was very humble which made her an admirable character.

At 12pm, she was called into the office for a meeting. She had been promoted! Beginning next week she would be head nurse on another floor. Walking out of the office she was ecstatic and began planning small leaving presents for her current colleagues.

At 4pm (an hour after her shift finished) she left the ward to go to the gym. Sarah was very active and this was the half an hour where she got some downtime to think and plan. Her boyfriend was coming into town the next day. She was so excited; this would be their first night spent together. It would be perfect. She could hardly wait!

By 5.30pm, Sarah was at home cooking dinner. Noticing the answer machine she listened to the new message. As the voice began to speak she quickly deleted the message. She had no time for her father. He was always trying to mess with her life and she hated it.

I could go on and on about all of Sarah's good works: her giving to multiple charities, volunteering at local council events, her being a feminist and social activist. She is a good person right?

The only blip on her record is her treatment of her father—but it could be deserved. He may be abusive and controlling.

Well, here's the story from his side.

Mark loved his daughter. He had sacrificed so much for her! Complications with her birth meant that Lucy, his wife, had died. They had made that decision together, so Mark didn't regret it, but he still loved Lucy and had never remarried.

Sarah showed a lot of potential and compassion for others growing up. But she never seemed to bond well with Mark—and that hurt. Mark provided her with the best food to make her strong, the best education to grow her intelligence, the best home so she could feel safe when she slept. He accompanied her to all the after school activities she chose. Yet she never thanked him.

Sarah was spoilt with good things, but she was also disciplined. Mark discovered she had bunked a few lessons in high school and as a consequence he had not tutored her in that subject. Her lack of effort that term meant she failed one of her exams, for which she blamed Mark. Obviously it wasn't his fault, but she didn't care.

A boyfriend then came on the scene, and Mark cautioned her that having sex without commitment was destructive. She slept with him anyway, only to be dumped a few months later. Hurting, she blamed Mark for their break up, saying he had been overbearing with his advice.

Nursing was the next big move. Mark continued to pay for her education, but Sarah ignored him. She moved into a studio, which Mark paid for and she still lives there now. Mark continually sends her gifts, which Sarah takes, but never acknowledges him for.

It is fair to say Sarah hates Mark. She is happy to continue using his resources without ever thanking him for them. She has now begun pretending he doesn't exist. Even if he did exist, there are awful things that happen to friends around her, so why wasn't he helping them?

How do we treat our Father?

Now again I ask, is Sarah a good person? I wouldn't deny she is doing a lot of amazing things with her life. But this good doesn't make her a good person when it comes to how she treats her father.

In the same way seemingly godly non-Christians show that they are not truly good by how they treat the one they should call Father; the one who made everyone and died to set those who believe free is ignored and hated, his gifts abused.

One aspect of Mark's character which doesn't come out so clearly in the story is his justness. Things will not continue in the same way forever: one day there will come a time when enough is enough. Sarah will find that she is unable to access Mark's love anymore. The sad thing about it? She won't even want it nor realize how much she needs it until it is too late.

But we all need a Father's love. We all need God and his love. He is the true good and our measure for understanding what makes a good person. 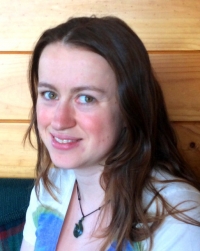 Rachel Bartlett lives in Christchurch, New Zealand with her husband James and her puppy Pip. She works part-time as a staff worker for Christian Union at Canterbury University and the day she wrote this was her Birthday.

Rachel Bartlett's previous articles may be viewed at http://www.pressserviceinternational.org/Rachel-Bartlett.html