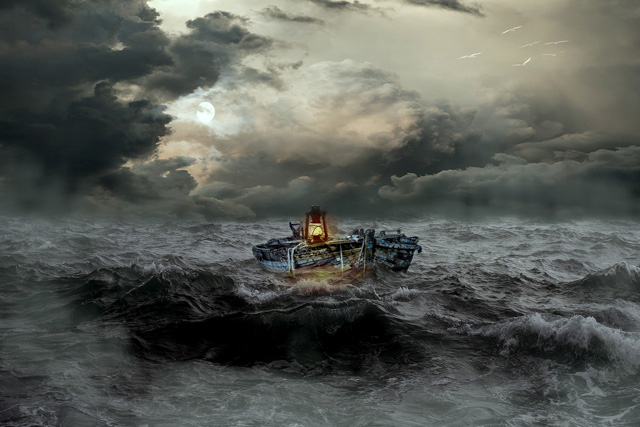 You’ve been there at some point in your life. Or maybe you are there right now. The storm experience.That tricky or difficult season in your life. You may be having severe difficulties and opposition at work from your colleagues or boss. It may be a health challenge, or coping with a sick loved one.

It could be a breakdown in a marriage or cherished friendship. Maybe you’re facing the consequences of a mistake or bad decision you made. The death of someone close to you.Money woes. Perhaps your storm is deep anxiety, which you feel at a critical juncture in your life.

Or you have a big decision ahead of you and you don’t know where to turn. Maybe you feel lost; as if life is coming at you way too fast. Storms take many forms.

But there is value in each storm. Storms are the best teachers; and I want us to spend some time together looking at lessons from storms.

The storm I am going to use to illustrate the lesson is found in Mark Chapter 4 verses 35 - 40. It’s worth reproducing here:

That day when evening came, he [Jesus] said to his disciples, “Let us go over to the other side.”  Leaving the crowd behind, they took him along, just as he was, in the boat … A furious squall came up, and the waves broke over the boat, so that it was nearly swamped. Jesus was in the stern, sleeping on a cushion. The disciples woke him and said to him, “Teacher, don’t you care if we drown?”

He got up, rebuked the wind and said to the waves, “Quiet! Be still!” Then the wind died down and it was completely calm.

He said to his disciples, “Why are you so afraid? Do you still have no faith?”

1. Grab your cushion and sleep!

Though it’s good advice to take a nap and ensure you are properly rested when you are under stress, I’m not referring to physical sleep. The Oxford Dictionary defines “sleep” as a “condition of body and mind which typically recurs for several hours every night, in which the nervous system is inactive, the eyes closed, the postural muscles relaxed, and consciousness practically suspended.”

What are you trying to say, Jesus?

The message that came across to me was: when you find yourself in a storm, get comfy. Relax. Recline. Jesus could sleep on a cushion in a storm, because he absolutely wasn’t troubled. He was unconcerned because He knew who He was and who His Father was and so he had no doubt any situation He was in would work out for his good. Jesus once said his sustenance (what literally kept him going) is doing God’s work and will (John Chapter 4, verse 34) and He made it clear that everything He does is because He saw His Father doing it (John Chapter 5, verse 19).

When you are the Creator of the physical earth, you don’t get scared of natural disasters. You made water and wind, so you can command them to calm down. That explained his peace but Jesus is surprised that his disciples, His followers, don’t have enough faith to adopt the same posture of peace. Jesus perhaps was reflecting on all they had heard Him teach and seen Him do, and was shocked they still couldn’t understand that the one in their presence was God.

Plus, He already told them their destination: “let’s go over to the other side.” He didn’t say: “Look guys, we’re going to get into the boat and see what happens.” Granted, He left out the part about an impending storm, but He didn’t tell them that a painful drowning was part of His agenda.

The point is you can rest when you know your God, and know that He is with you. Your disposition and the environment you are in don’t need to match. Cloudy weather doesn’t have to mean a cloudy mood. Jesus tells us we will have storms but He assures us He is with us (John Chapter 16, verse 33). You’re not in the boat alone. Get out your cushion of faith in who Jesus is, and what He says He will do.

The degree to which you are comfortable in a storm reflects the level of your faith.

2. Remember that you are not defined by others, but by what God says.

The other interesting thing about the storm scene in Mark Chapter 4 is that the disciples pretty much call Jesus callous and unfeeling. That is the clear implication of the rhetorical question: “don’t you care if we drown?” Another way they could have said it is: “how can you be so heartless?” The disciples interpreted Jesus’ calm in the storm as a sign that He didn’t care.

When you are in your storm, people may call you names. In the minds of many people, Joseph was just a prisoner and an alleged rapist, not a future leader of Egypt. Don’t be defined by what people say, think or feel about you. The apostle Paul, who faced oppression in spreading the faith, was often insulted. Here was a man who used to pride himself on his status in society as a respected Pharisee (Philippians Chapter 3 verses 4 to 5).

But for the sake of Christ, Paul says: “I am content with insults!” (2 Corinthians Chapter 12 verse 10).Some  translations  say he “delighted” in them. Here is a man who had so lost his ego, arrogance and pride that he didn’t care what people said about him, as long as he was being an example of Christ.

Maybe people will misread your response to a stressful situation as your being disengaged or not coping well. Maybe you’re not hanging your head in shame about something you did wrong, or freaking out trying to figure out how a mistake you made is going to be resolved; or maybe you are taking the time to find moments of joy in the midst of a loved one’s death or illness.

Maybe you’re the only one in your office who is still smiling with a sunny disposition each morning even though your entire department just got news they may be downsized. But you are responding this way because you are trusting the situation to God and that’s okay. Ignore the noise of the furious wind.

When we are mischaracterised by others, our temptation is to react by acting in the same way they’ve labelled us. So you may have been extremely kind to someone who later calls you selfish. You may retort: “So you think I’m selfish? Well let me show you selfish!” and promise yourself that you will never give them anything again. In doing so, we adopt the very trait we’re reacting to. We all do it.

But it’s important not to act in the way someone has labelled you. The disciples are lucky it was Jesus in the boat and not me. Here’s how the scene and dialogue would have happened:

Me (as Jesus): Why are you waking me from my sleep?! What’s wrong with you people?!

Disciples: It’s a storm! “Teacher, don’t you care if we drown?”

Me (as Jesus): “What??! Hold on! You’ve been with me all this time, heard my teachings, seen my miracles, the healings and how I look after you and you think I don’t care?! And you say this to my face?!”

Me as Jesus: Well, if that’s how you feel and expect me to rescue you ungrateful people, forget it! I’m leaving you in the storm. You figure your way out! [Sharma walks off on water]

If Jesus acted the way I would have, He would have proved Himself to be exactly who they accused Him of: someone heartless. Instead, He told the storm to cease, demonstrating His Love. Not only is Jesus not jaded by this experience, He goes on to keep loving people in tangible ways, such as feeding thousands (The Gospel of Mark, Chapters 6 and 8).

In short, when we are in our storms, avoid the natural tendency to behave in a way that doesn’t show your true nature. Let’s consciously choose to act in a way that is true to our character as God’s children. Treat people better than you think they deserve. Why? God does that with you. While we were sinners, He sent His Son to die (Romans Chapter 5, verse 8; and Romans Chapter 5, verse 10 - which refers to us as “God’s enemies”).

The language we use can make a bad situation feel worse. Negative self-talk or pessimistic predictions you may make to others won’t help you in your storm.  Inner turmoil can lead to bad dreams, nightmares, and general anxiety. I remember at a particularly rough time at work, I always dreamt of being caught in a tsunami. I would stub my toe or drop something, or my tire would climb the curb and a word that I don’t ordinarily say would suddenly come out and shock me! It’s language I don’t use. But what flies out of your mouth in unguarded moments?

When you face a storm, it quickly becomes clear what’s really in your heart. The disciples had given up their previous way of life to follow Jesus, but they told Jesus exactly what they really thought of him when the storm nearly drowned them. If you find yourself not speaking with faith, ask Jesus to cleanse your heart.

That’s why Jesus says it’s not what you eat that defiles you but what comes out of your mouth, and essentially reflects the position of your heart. You’ll see this in Mark Chapter 7 verses 15-23, after Jesus chastises the Pharisees for saying all the right things but having hearts that didn’t honour God.

So when you are in your storm are negative thoughts spewing out? Repent and ask God to give you a reset, a fresh heart.

Use the storm as an opportunity for a heart check. Am I having an issue of pride? Am I insensitive to the needs of others? Am I selfish? Have I ignored the feelings of others? Am I right with God? If not, confess your sin and repent (Psalm Chapter 51, verses 1-2).

Sharma Taylor’s previous articles may be viewed at: www.pressserviceinternational.org/sharma-taylor.html