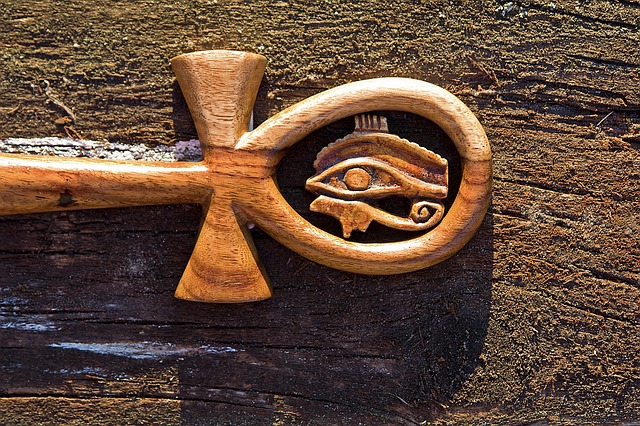 When I was growing up, I loved anything related to ancient Egypt. Seriously, my room was decked out with posters, statues, and pieces of papyrus, while my shelves were stacked with books on all aspects of Egyptian life, history, and mythology.

As much as I loved anything Egypt, mythology was certainly my greatest area of passion. I especially loved the narrative of a god named Horus, the falcon-headed sky-god. I was a weird kid.

I wanted to become an Egyptologist, and eventually write a book on Egyptian mythology. I was about 12 at the time, so I really was a weird kid.

As I grew older, I decided this wasn’t the most prudent career decision, but the passion and knowledge stayed with me. As soon as I turned 18, I got the Eye of Horus, one of their religious symbols, tattooed on me (after becoming a Christian, I got that one covered).

Fast forward to a couple of years ago, I saw a documentary titled Zeitgeist. The film was a collection of conspiracy theories, including one which purported that the story of Jesus was almost entirely derived from other religions, including the aforementioned story of Horus.

The same thesis was furthered in the film Religulous, in which comedian Bill Maher posits that many of the central tenets of what Christianity are to be found in the Horus mythology from 3,000 years earlier!

This claim is also often seen in meme form and does the rounds on social media, especially around Christmas. If you haven’t seen it, here is a link.

What they collectively claim is that thousands of years before Jesus, Egyptians believed that Horus was born of a virgin, his birth was announced by a star which led three wise men to him, he was baptised and had twelve disciples, he performed miracles such as walking on water and raising people from the dead, was crucified, buried, and resurrected three days later, and was known as the Christ/messiah.

Then, about 2,000 years ago, a bunch of guys decided to invent a religion. They stole this one about Horus, and applied the details to a fictional Jesus. Contemporary Christians have therefore been duped by an ancient con.

This sounds convincing, and actually like a pretty powerful argument against the veracity of Christianity. This description of Horus is almost identical to what Christians believe about Jesus, so it’s compelling evidence that Christianity is a plagiarised version of an older religion.

Yet when I was first exposed to this claim, I was unsure. I felt pretty well acquainted with the Horus story, yet none of their claims sounded familiar—I certainly didn’t remember Horus being born of a virgin, or being crucified and resurrected. So, I decided to take a look at these claims for myself.

I soon realised you can’t believe everything you see in a meme/documentary/hear from a comedian. Essentially, this Horus argument which has been repeated ad nauseum, is fake news. I won’t go into each individual claim—they can easily be Googled—but I will go through some of the more pertinent ones very briefly.

First, unlike Jesus, Horus was never believed to have been born of a virgin. Instead, they believed that his father, Osiris, had been murdered and dismembered by Set (Horus’ uncle). Osiris’ wife Isis then gathered all of his body parts, except for his reproductive organ (it had been eaten by a catfish. Unlucky). So, she made him a fake one, and did what mummies (Egypt pun) do when they love a daddy very much (some accounts say Osiris came alive for this, others have him still dead. Gross). Hence Horus was born.1 Bit of a strange story, but certainly not a virgin birth.

Secondly, they claim that Horus’ birth was announced by a star, which led three wise men to him. First of all, Scripture never states the number of men, it just states that there were three gifts. Further, there is zero mention of this is any ancient sources regarding Horus. None. At all. Pure fabrication.

While Horus did perform miracles, he was a god, and simply did godly god things that gods do. All mythologies have deities performing miraculous deeds. But there is no record in ancient sources of Horus walking on water or raising people from the dead, as Jesus did.

Unsurprisingly, there is also no evidence that Horus was crucified and resurrected. Some narratives have him being poisoned and then brought back to life as a child, but that’s it. Furthermore, the earliest evidence we have for crucifixion as a concept isn’t until the 6th century BC—literally thousands of years after the Horus story.

There is, however, copious primary source evidence that Horus was referred to as the Christ/messiah. Just kidding. That claim is as blatantly fraudulent as the rest.

Overall, the story of Horus is completely different to the belief that Jesus Christ, the God-man, came to earth to sacrificially die in the place of sinful humanity, so that they could receive eternal life and perfect relationship with God. Any supposed parallels are unequivocally fabricated, there is not a scintilla of reputable evidence to corroborate the claim. But don’t take my word for it, even a cursory glance at Google or an Egyptian mythology book will debunk these accusations.

So my advice, whether you are a Christian or not, is simply to be discerning. Blindly accepting something you read on the internet simply because you like the conclusion is never a good idea. Be critical, think deeply, do research, and then form your decisions.

In Christ (not Horus),

Haydn Lea is an Associate Pastor in Queensland, and is currently studying his Master of Arts (Theology). He has been a member of the Royal Australian Air Force since 2007, and is now training to be an Air Force Chaplain. He is married to Shamsa Lea, is the father of Amira, and loves boxing and studying Theology. Any similarity between his articles and ancient mythologies are purely coincidental. Please don’t make a documentary calling him out for plagiarising millennia-old sources.