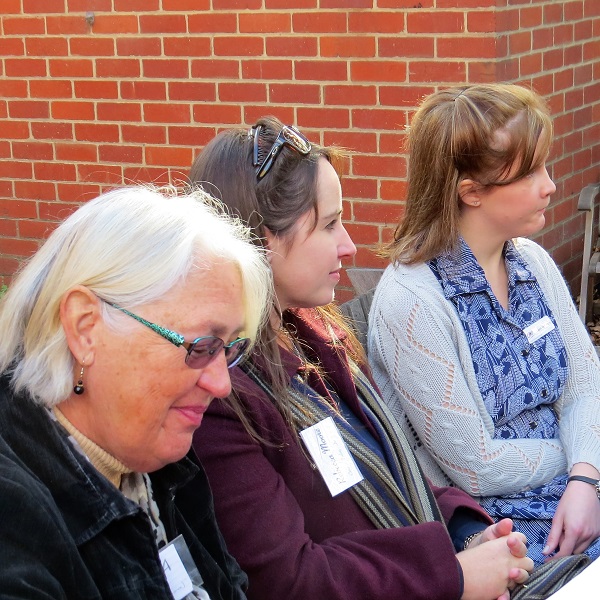 David Goodwin's session at One Day in Melbourne on Saturday 5 June at Moonee Ponds Salvation Army was titled Online Outreach. David Goodwin introduced his session - today is perhaps the most exciting time for sharing the Gospel since the time of the Apostles.

The internet provides us with mission field of almost limitless potential. And, it has a great deal in common with the environment in which the teachings of Jesus were first shared and the world into which the Apostles ventured to share the Good News.

However, it is in the points of difference that we encounter the greatest obstacles to successful online outreach, and it is compounded by the fact that many Christians seem unaware of them.

Perhaps the biggest factor in the rapid spread of Christianity is that Jesus was born at exactly the right time in history, in a world that had all the prerequisites needed for the Gospel to spread. I don’t believe that this was a coincidence, either, but God’s timing.

The rise of the Roman Empire meant for perhaps the first time in history there was both the infrastructure and the blurring of cultural differences needed for idea to spread quickly and easily. Most people spoke a common tongue so the communication barrier was far less of a obstacle, and reliable roads existed linking wide spread areas and making travel far more common. So, the Gospel could be carried from one side of the Empire to the other and understood when it got there, rather than be limited to one people, one place and one

In many ways, we find ourselves in a similar position of privilege and potential today. The internet means you can speak to almost anyone, anywhere. It’s not limited to a select few, or in the hands of the powerful so that they can decide who gets what access, nor does it require a skill set that takes years of study or training to acquire. All you need is an internet connection and device to connect to it. And then you have ability to share your beliefs with people who not so long ago may as well have been on the Moon. 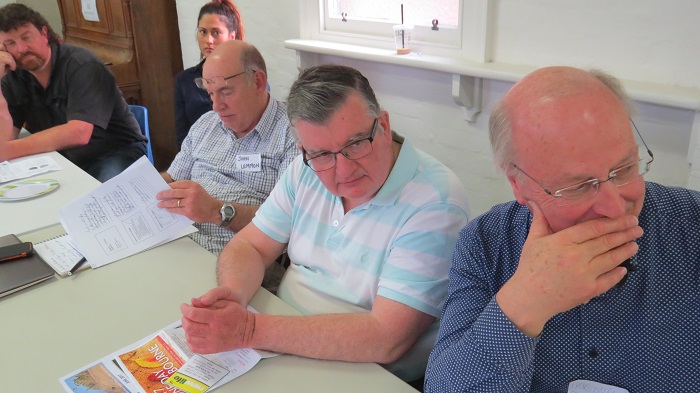 Mark Brolly and Noel Mitaxa at One Day in Melbourne

However, we face a number of new challenges unique to this time and place that need to be understood before they can be overcome.

One fundamental difference is that in the time of Jesus the world was ready and waiting for the Gospel, in fact they were actively looking for answers. It was like fertile and unspoiled field waiting for the right seed to take root.

Aside from a few outliers—you can find some amongst the Greek philosophers—it was pretty much taken for granted that there was a spiritual aspect to the world and to life. People were open to the idea of the supernatural, or gods whose influence could be seen in the world around you or felt in their impact on day to day life. You didn’t have to start out with convincing people that there was something more than the visible world, it was simply accepted wisdom.

Another boost to the growth of this new religion was that the rise of the all-conquering Roman Empire had created a huge group of people whose daily life made them desperate for a spiritual escape from physical slavery. They were the perfect audience for a message of liberation that allowed the enslaved to believe that they were as beloved of God as were their captors, and that their captivity was not a sign that he had abandoned them. In fact, they were presented with a Creator who had suffered as they had.

All this and more created a world that was ripe for the Christian message and provided the ideal conditions for it to thrive.

Something we have to understand, and that many Christians don’t want to acknowledge it that we have now moved past the era when Christianity was the dominant world view, in the West at least, and where even those who didn’t believe were still deeply entrenched in it. Like it or not, the truth is that we live in a post Christian world (which in many ways is a good thing though that’s a subject for another day.

When they shared the Gospel the apostles had a blank canvas. People had no preconceptions of Christianity that had to be corrected, they were hearing it with fresh ears. There was no historical baggage to colour their perceptions or to make them unwilling to give it a fair hearing. It was fresh and new and first hand.

Despite our cultural heritage of Christian thinking and the way in which Christian thought has entwined with every part of our society, from law to the everyday phrases in the language we speak, we don’t live in a world where everyone already has heard the Gospel, and has rejected it from a position of understanding its message and teachings. We live in a world where the vast majority 'think' they have heard it, and 'think' they understand it. To mangle Chesterton—the Christian ideal has not been tried and found wanting, it’s people’s idea of what Christianity is that they have judged and found wanting. 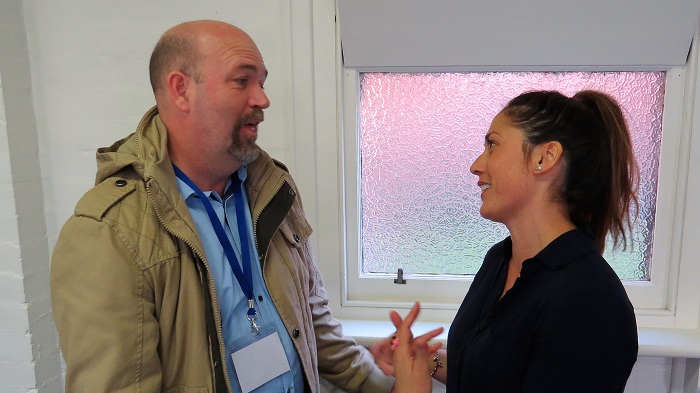 Sarah McDonald and Russell Wright at One Day in Melbourne

The Gospel that most people have in their minds is a Hollywood version that has no depth. It’s an institutional version that is safe, and has had its teeth pulled so it can’t bite the people in power. Ask the average person what the Gospel is about and they will most likely say something to the effect you need to try and be a good person and if you are you go to Heaven. Or they have heard that it means you must hate science. Or it conveniently reinforces their political ideology or prejudices and allows them to feel justified in who they consider less worthy than themselves.

The Gospel that most people outside the Church (and, sadly, some in it) is a second-hand message at best, filtered through the media or the government and changed to suit their agenda. Often it is at odds with the Bible, and means that when we try and share the real thing it is like trying to teach someone how to use an Apple Mac when they have grown up using a PC.

It’s not just that they need to learn new ways of doing things, they have to unlearn things that have become habit but no longer work. In the vast majority of cases, it is easier to teach something to someone who hasn’t already learnt a different way of doing it and has to unlearn it. Cricketers taught bad technique as children struggle to ever change later on in life

So, unlike the Apostles setting out on the Great Commission, when we go out into the world it is almost certain the people we will encounter already have a preconception of what Christianity is, and have already discounted its value based on that. So, we need to be prepared for the fact that before we can do anything else we need to deal with those preconceptions, not only correcting misconceptions but convincing people they should give Christianity another chance.

In the post Christian and post modern world nothing is exempt from the burden of proof. We need to understand our own faith, what it is that we believe, and why. In our Christian circles we are generally surrounded by people who are generally inclined to agree with you, or we have a friendly audience listening to our sermons because they are starting out from the same basics as us, or are willing to accept the Bible as an authority when you are debating theology with them.

The pre Christian pagans believed they needed the gods and that without them they couldn’t find meaning. The modern world teaches that humanity doesn’t need anything more than what is contained within ourselves. 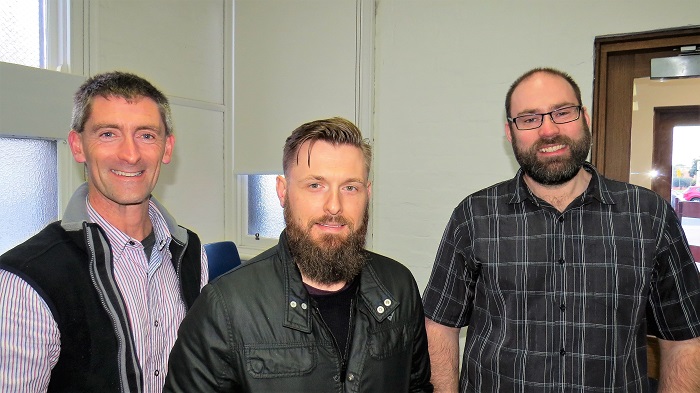 Jeremy Dover, Wes Tronson and David Goodwin at One Day in Melbourne

David Goodwin followed this introduction focusing on how he joined online groups whereupon he found a different kind of community to ply his Christian life in a sensible manner, and significantly, with on-line manners. There were a number of common criticisms of, or arguments against, Christianity that were brought up again and again in these on-line groups and I wrote them up as articles that I could simply use again.

Things like Euthyphro's Dilemma, or the claim that more people had died in the name of religion than anything else, or how could a loving God send people to Hell, or what happens to people who die never having gotten to hear the Gospel.

I've often though my about bundling them all up and turning them into a book. Maybe I I should tack them on the back of that and call it "David's Guide to Online Apologetics" – David has this available along with his full presentation at One Day in Melbourne - david.goodwin@esacc.org.au

But in your hearts revere Christ as Lord. Always be prepared to give an answer to everyone who asks you to give the reason for the hope that you have. But do this with gentleness and respect, keeping a clear conscience, so that those who speak maliciously against your good behaviour in Christ may be ashamed of their slander. 1 Peter chapter 3 verses 15-16 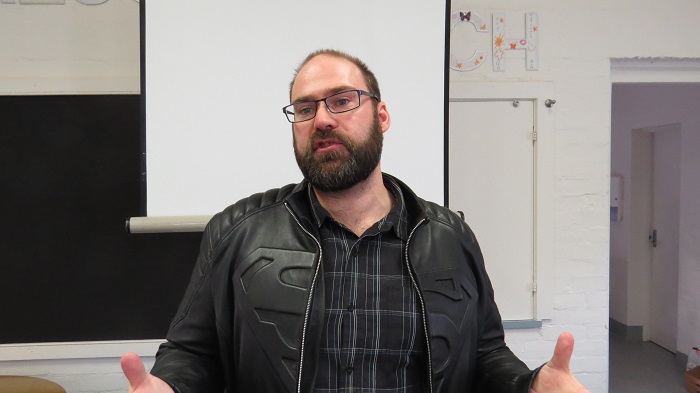 David Goodwin is the former Editor of The Salvation Army's magazine, On Fire. He is a freelance writer, and an unapologetic geek.