I was never the sort of person that would ever be seen at a women’s conference. The thought of a room full of estrogen and high-pitched screaming voices all singing in unison (sometimes not) slightly freaked me out. Ironic, isn’t it? But it wasn’t until recently that I went to my first official women’s conference at my church.

It was female central. I know that sounds like a ridiculous thing to say–especially seeing as I myself am female, however, the thought of being stuck in a room of about 500 plus women for a three-day conference is quite a scary thought at first—until you walk in.

The conference definitely did not pan out to be the dramatic, overly intensified version I had previously replayed in my head before walking through those doors. Instead it was fulfilling, exciting, encouraging and thought-provoking. You can just imagine how my interpretation of a women’s conference had abruptly changed.

There is something very powerful about a group of women meeting together not only to praise God, but to pray over each other for strengthening, healing, blessing, and for guidance over their lives. The Bible says in Matthew chapter 18, verse 20 ‘For where two or three gathers in my name, there am I with them.’

God working through women to speak to other women to develop and encourage their lives so that they may take God’s word home to their families who will then be blessed by it is an extremely powerful thing.

God working through His daughters is definitely a force to be reckoned with. He is constantly reminding us that although we may feel insufficient, less-than, lonely, busy or often overlooked, there is not a moment that passes by without God whispering into our hearts how much He loves us.

We are His warrior women, and he is training us, but we must first find our strength in God and also be the encouragement in other women’s lives who are feeling discouraged.

Encouragement doesn’t often come easily. It is something to be worked on. Some people have an amazing ability to be able to encourage others even when they themselves are feeling discouraged.

As daughters of God, we should be those kinds of women. The ones who build each other up, who support each other, who get excited when another woman is excited. We should be so focused on encouraging other women that we have no time to focus on the things we are discouraged or insecure about in our own lives.

Can you imagine if all the women of the world decided to drop all their insecurities, forget about the things they felt they lacked in life, ignored their misfortunes and the negative words that others may have spoken over them, and instead they decided to pick up the identity and persona of Jesus Christ and become a part of the cheer squad for other women?

Being strong isn’t about the physical appearance, the attention, the accomplishments or the attitudes we set for the world to see. Being strong is when we let Jesus be our strength.

Habakkuk chapter 3 verse 19 says, ‘The Sovereign Lord is my strength; he makes my feet like the feet of a deer, he enables me to tread on the heights.’

When we let God be our strength, we actually release our old identity to Him and allow Him to restore and give us a new identity in His strength.

Strong women exchange their identities for an identity in Christ. They reflect the way Jesus treated the woman at the well, the blind man and the beggar, the tax collector and the sick girl. Jesus loved on people when no one else would. He saw them at their lowest and said, ‘I love you’. That is how we need to act.

Forget about the forceful nature of competing against one another to be better, and instead let’s be all about living as a Jesus-like woman who builds other women up.

Let’s group together and look through the eyes of God at how He wants His daughters to treat each other.

Let’s be strong women of God by building one another up in Christ and strengthening each other with God’s love.

Let’s be kingdom builders and strong representatives of God by reflecting him through our lives. Let’s be like Jesus. 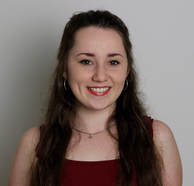 Cartia Moore is a sword fighter, trained and skilled in the art of fencing. She is currently studying a Bachelor of Arts, majoring in Screen & Media Studies, and minoring in Drama and Creative Writing. Her focus is film, television and swordfighting sequences. She is a youth leader and has a passion for bringing young girls to God and helping them to seek and find their worth and value in Him.