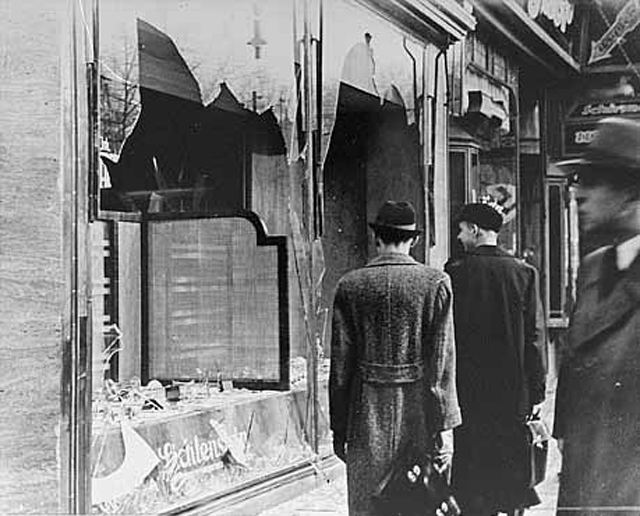 Diduno (Did you know) is a ministry of which I am President in which we provide a wide range of important historical information (for schools, universities, publications, on-line) and this is one of these and the information itself came Diduno's Annie Hamilton.

With a single swift swing the sledgehammer exploded through the window, sending splinters of glass flying through the air. The young storm trooper wielding the hammer turned his back as crystal shards tinkled to the ground.

“Vom Rath will be avenged! Destroy another Jewish shop!” He directed his squad of brown-shirted thugs, many of them armed with crowbars, further up the street.

By the end of the night, so many windows in Jewish shops and synagogues across Germany had been destroyed that the carnage was dubbed ‘Kristallnacht’—Crystal Night or the Night of Broken Glass.

This was another event leading up to the 2nd World War that had international attention.

Hitler’s claim that thousands of ordinary people across Germany and Austria suddenly rose up as one murderous body to avenge the murder of a German diplomat was far from believable.

Supposedly, it was to expend their fury over the shooting of Ernst vom Rath, a young embassy official in Paris, by a seventeen year old Jewish boy. This boy was angry at the Nazi regime, for herding his father into a crowded boxcar and deporting him to Poland. Ironically vom Rath was opposed to the Nazis for their vicious anti-Semitism and was simply in the wrong place at the wrong time.

In retaliation over 30,000 Jews were rounded up by the Nazis and deported to death camps and the world—mostly—fell silent.

Stung by the reports of destruction, looting and wholesale arrests of innocent people, William Cooper decided to act.

Knowing that silence encourages the oppressor to continue perpetuating injustice, he took his protest to the German Embassy in Melbourne on 6th December 1938.

Leading a delegation of the Australian Aboriginal League he tried to deliver a formal petition which condemned the “cruel persecution of the Jewish people by the Nazi government of Germany.”

Although the petition was not accepted, the protest did not go unnoticed. When the people of Israel made plans to set up Yad Vashem, the Holocaust Museum in Jerusalem, they found this record of what is considered ‘the only private protest against the Germans following Kristallnacht.’

As a result William Cooper is highly honoured in Israel.

A memorial at the Yad Vashem and seventy Australian trees have been planted in Jerusalem to pay him tribute. An Academic Chair in his honour has also been created in Israel. The professorship attached to this Academic Chair is valued at one million dollars. A truly significant legacy!

“I must give my heart to God”

In his early twenties, and influenced by the teaching of the Bible, William announced, “I must give my heart to God…”

Nourished by the faith community of the Aboriginal Mission at Maloga, William’s growing understanding of Scripture began to equip him for a fight for equality for his own people. A long campaign for indigenous rights began.

When he was in his seventies, his serious activism began. This was because he discovered that he couldn’t get the pension if he stayed on an Aboriginal Mission. So he moved to

Melbourne – and began writing letters and putting together petitions. Of all the goals he set for himself during his lifetime, only one was achieved: that of creating Aboriginal Sunday. It is still commemorated today: as NAIDOC week.

Although William died in 1941, he inspired an entire generation of Aboriginal people to seek justice and to work for the elimination of racist elements in Australia’s government legislation.

Report on Kristallnacht in The Argus: http://trove.nla.gov.au/ndp/del/article/12062109