The speakers for 2019 One Day in Melbourne 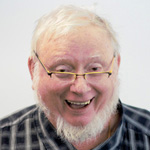