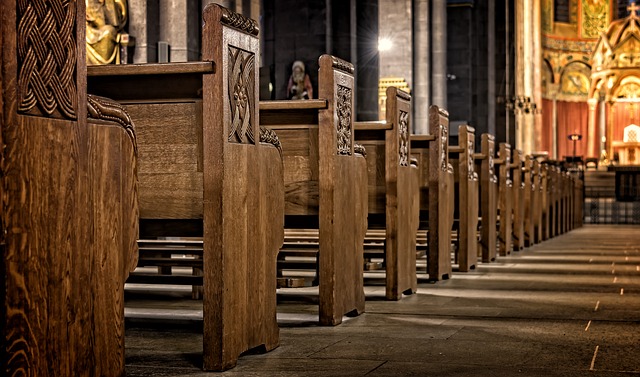 She slept the sleep filled with little girl’s dreams, or so she believed. But those dreams were interrupted by his body pressed against her back as he rubbed himself against her. She tried desperately to get lost in dreams but the nightmare of reality clung to her consciousness, rendering her helpless.

So she surrendered, laying still once more as the monster, called protector, scarred her innocence with his pleasure.

She sat in the sanctuary as the congregation applauded and lauded praise on him. As the service ended he walked to her, smiling with congeniality to the congregants he greeted. Frozen stiff with a plastered smile of religious right behavior and overwhelming panic, she was swallowed into him, arms around her with a “church greeting”- the ‘ick’ of his sin laying on her body.

She affixes a smile on her face because she is expected to forgive. The church leadership spoke with him and… he is sorry.

The story varies but the experience is real, countless victims laying waste at the mercy of others who overlook their travesty, misunderstanding of the nature of God’s justice alongside repentance and forgiveness.

Rachel Denhollandar made a statement that hit believers to the core. A survivor from the sexual assault travesty caused by US Gymnast team coach and osteopathic physician Lawrence Nassar, she expressed that the church was the worse place for a victim of sexual assault.

As a Christian this statement disturbed me. Is this true I wondered, and if so, how could this happen? All organizations want to pull ranks and cover their own, but I was perplexed that we weren’t different.

In the article, Should Churches Handle Sexual Abuse Allegations Internally? Jem Zamzow postulates that there are internal biases operating when the church takes full responsibility in handling allegations of sexual assault amongst their own. Research showed that even when trying to be as accurate as possible, if we’re already on a particular “side” of an issue, our ability to view the situation objectively is hindered.

This bias can also increase the likelihood that we put away the bad behavior. It can permeate the entire evaluation of the situation and the decisions made. “People who have an interest in seeing data in a particular direction have a hard time being objective about a range of judgments and in a variety of contexts.” The greater danger, she posits, is the risk of justification because the accused is doing the “noble task” of working for the “Kingdom of God.”

The Problem of Forgiveness and Repentance

Forgiveness is good, right and true. The gift offered in salvation and eternal life is based in part on the forgiveness offered to us when we place our faith in Jesus. By grace we received forgiveness for our sins and are adopted as co-heirs with Christ. This same measure of grace is required of us, as we are charged with the mandate that we forgive as Christ forgave us.

Repentance is an awareness of the extent of your wrong, and the dishonouring of a holy God. This acknowledgment of wrong, and realization of the the need for God’s grace, should result in subsequent surrender and turning away from the wrong.

I believe victims are freed when they are able to forgive those who have wronged them. Holding on to vengeance, hurt and shame leads to self-destruction. I also believe that the accused needs to come to a place of repentance and seek forgiveness from God and the ones they hurt. The problem with treating this as the be all and end all, however, is that the church runs the risk of abuse of power and the perpetuation of victimization.

What Does Scripture Say

Sean Taylor, a pastoral intern said this: “The scriptures are filled with passages which call us to protect and rescue the vulnerable in society; those who are weak and voiceless (see Proverbs chapter 31 verse 8). Abuse cases for example, stand out as a great example of people who are weakened and silenced as they are being broken by abusive power. God’s heart for them requires us to pursue such individuals with protection from various forms of domestic abuse and violence. This would involve utilizing the God-given resources of State to care and protect.” (see Romans chapter 13 verse 4)

The biblical stories of Dinah and Tamar are definitely not scattered across the pages of the photo-bible children get at birthdays and baptisms. It’s not the story gravitated toward for Easter or Christmas services. However, the injustice of being victimized for sexual pleasure resulted in civil war. There was an evident response to their injustice. (See Genesis.34 and 2 Samuel 13)

He further cautions that these four things should not be “pitted against” each other. They are not mutually exclusive. He explains that we are to pursue all of these simultaneously, trusting that these directions given by the Lord do harmonize and serve to strengthen and protect people.

Why do we not report? Is it because we are scared of how it will make us – the body of Christ - look? Are we protecting God? Timothy Keller in his book Generous Justice: How God’s Grace Makes us Just says, “Israel was charged to create a culture of social justice for the poor and vulnerable because it was the way the nation could reveal God’s glory and character to the world.” In discussing Deuteronomy chapter 4 verses 6-8 he highlights that it was Israel’s example that would be what the nations looked at as an example of justice and peace and that this resulted in them being attracted to Israel’s God.

It’s not because we act perfect or look good, that people are drawn to God. Our “perfectness” is not God’s P. R. It’s our response to justice, our love for one another, and our adherence to truth that will point the world to Him. Covering up and hiding does nothing for God, the broken victims or the fallen perpetrators.