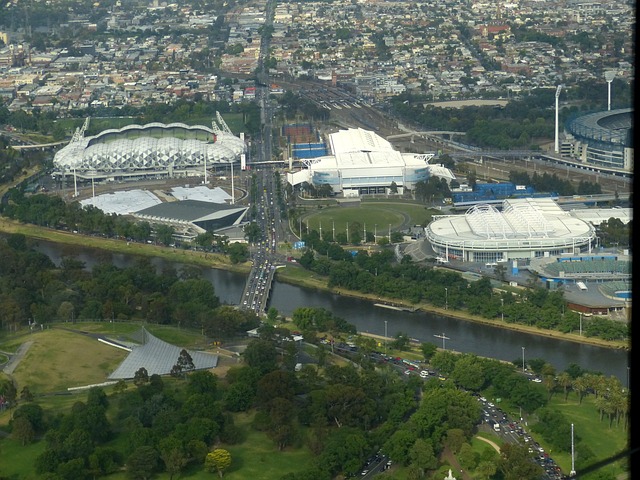 There has been a mission questing for the hearts and minds of the people of this nation. One that began with the heartlands in the south and west and has spread across the country and across the southern hemisphere. There are followers across the globe and one group has even made future moves into China.

Of course I am talking about Australian Rules Football and it's continuing proselytising ways. This mission is of the utmost for the AFL and has spawned clubs across the country and a national women's competition. Though as I found out in Canberra it is far from complete domination.

I was brought up in Aussie Rules heartlands, Perth, one of the great centres of Australian Rules Football. I was inducted into the East Fremantle faith very early, 18 months old. When finally the Fremantle Dockers began in the AFL I was proud to leave the Eagles behind. I have the first edition Fremantle scarf, the footy cards of the first players and I was there for their first MCG game. Having lived in Darwin, Adelaide and Melbourne Aussie Rules has always been around.

More than one Football Song Sung

This Easter I was in Canberra for the GWS v Port Adelaide Game. It was after the final siren had sounded that I heard something I had never heard before. As the GWS song was played the second time (which is quite normal) a spectator said “They're playing it a second time? Isn't that rubbing it in?”. Even in the Nations Capital, the national game, the oldest code of football and its traditions are still foreign.

We live in a country that has more than four football codes. Six, if you count Gridiron as football. Despite that our biggest participation sport is Netball. In contrast Rugby Union looks to be loosing a couple of Australian expansion teams. On the up Rugby League has appeared to halt their player scandals. For the AFL the success that is Greater Western Sydney looses its shine when you see both Queensland clubs struggling. I often wonder if there is room for so many different codes in one small nation. Let alone eighteen teams in the AFL.

I was asked by a German born friend what would happen if Australia only had soccer. My reply was that we would have won a World Cup by now. I still believe that. But I also believe that if not for a cynical Italian fall in 2006 the Socceroos would be World Cup finalists right now. Lets be honest we punch above our weight in most sports worldwide. Imagine if the whole football focus was on one code. You know, like New Zealand and Rugby Union.

I played soccer despite being brought up in Aussie Rules dominated Perth. I have played alongside Greeks, Italians, Canadians, French, Scottish, Irish and Africans. It was an English ex-pat who played at my club who asked me about the songs at AFL games. “How many songs do they sing?” was his question. Most football clubs in England have a multitudinous array of songs that get sung. Where Aussie Rules clubs only have one.

The Perth Glory faithful at one time had an actual song book with meetings scheduled for fans to rehearse them. This has begun to trickle into the AFL with Port Adelaide singing INXS's “Never Tear Us Apart” but it doesn't compare to “You'll Never Walk Along” being sung by Liverpool fans, yet.

Now back to the Game in Hand

Watching the Giants and the Power playing at Manuka Oval in Canberra on Easter Saturday was different. The game was in the balance till the fourth quarter when the Giants were just too young, too tall and too fast for Port Adelaide. But there was no tension and barely any cheering apart from each clubs cheer squad at either end of the ground. I saw a lot of people rushing off for wood fired pizzas and the guys in my row of seats were non-stop back and forth getting beer. A lot of families there which bodes well but it was not the atmosphere I was used to.

I am quite sure it was not the size of the crowd, as small crowds at the MCG felt louder. I have been to Geelong to watch the Cats play, where they are very passionate. I have spent time in country Victoria watching Bendigo League games that had more charge in the air that at Manuka that night. There was a sense of spectacle, there was a crowd but not enough knew the songs that were being played. They may have known the tune and a few lyrics but not like they were true converts.

While the AFL may pray for a revival like passion to sweep the nation and the world for their code of football I am sure we all doubt this will occur. Despite having a great Aussie Rules centre in New South Wales, it is in Wagga Wagga far from Canberra and Sydney.

The GWS Giants may play a few games at Manuka and even doctor their songs lyrics replacing “Sydney town” with “Canberra town”. Right now they are not the main faith just the exotic spectacle. The new big show in town all orange and charcoal. Meanwhile my Auntie, a Canberra local, can sing the Canberra Raiders “Green Machine” song.