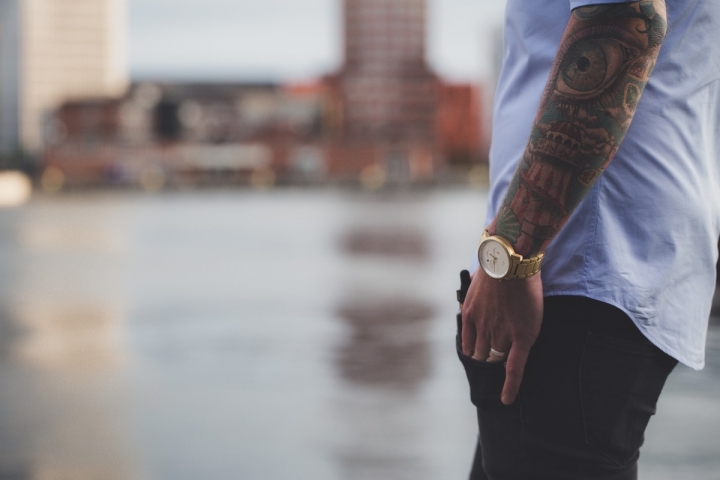 One of my favourite roles as a trainee pastor a few years ago was travelling to the myriad of small country churches in my area to preach. Many churches had no full time pastor, so a student who was willing to preach for free was a blessing. I was even more blessed immediately after the service, when I came to realise that country church morning teas are easily the greatest.

Yet my fond memories of fluffy scones, lovely people and breathtaking scenery are perhaps marred by an encounter I doubt I’ll ever forget. One morning I arrived at a particular church for the first time and took my seat.

Suddenly a lady marched directly over and pointed at the uncovered part of my arm. Without stopping to find out who I was or exchange polite pleasantries, she barked “I hope you got those tattoos before you were saved!” She never did wait for a response, but rather deftly turned on her heel and marched away.

I know some readers will simply shake their heads and laugh. Others will agree with her assessment: tattoos have no place in Christianity! This is, after all, a common view.

Besides this experience, I have had other Christians tell me that Leviticus clearly teaches against tattoos. Somebody in my church even gave me a number of anti-tattoo publications in order to correct me.

We have had potential visitors phone and ask if they are even welcome in our church, because they have visible tattoos. I have known of others still who have been told by relatives that they have no place in God’s kingdom, due to the ‘unforgivable sin’ of getting tattooed.

All of which raise the question: is it permissible for Christians to get tattooed? Clearly, this is an important question as people are forming dogmatic positions—even viewing adherence to their position as a prerequisite to salvation.

It is impossible to deal with this issue without discussing Leviticus 19:28: “You shall not make any cuts on your body for the dead or tattoo (קַֽעֲקַ֔ע) yourselves”.

This appears to be simple—Scripture forbids tattoos! Maybe. But I think a closer look is required here.

The truth is, this word translated tattoo (קַֽעֲקַ֔ע or qa’aqa’) is a disputed hapax legomena (a word used only once in Scripture)—this is the only time ‘tattoos’ are mentioned, and even this precise meaning is unclear.

Usually when trying to ascertain the meaning of a biblical term, you look at how it is used elsewhere. Yet because this word is never repeated, its exact meaning is uncertain. It is translated as incision, tattoo or mark and appears to come from a root word meaning “cut off”. So we cannot say for certain that a modern-day tattoo is even intended here. Of course it would be anachronistic for us to think of modern tattooing and read that back into an unknown ancient term anyway.

Overall, we should avoid creating a dogmatic statement upon a disputed hapax legomena.

With an initial word study turning up little, another handy tip for ascertaining meaning is to look at parallel passages.

This is the case with Leviticus 19:28. The parallel text can be found in Deuteronomy 14:1—“You shall not cut yourselves or make any baldness on your foreheads for the dead.” Here the cutting of oneself is repeated, and the parallel action is shaving one’s forehead. The idea of a tattoo is not repeated here (and we certainly do not enforce a prohibition on forehead shaving).

The consistent element of both texts is “for the dead”, and I believe this element is foundational.

So even if Leviticus was referring to the modern concept of tattooing, the broader context is referring to something for the dead. Combined with Deuteronomy, the prohibition specifically refers to altering your appearance as an act of honour or sacrifice to the dead. This was surprisingly common in ancient pagan religions.

I think the point that is most relevant to us today is that Christians are not to worship, elevate, or give a role to the dead. Death no longer has any power over us.

Given this reference to the dead, and the status of קַֽעֲקַ֔ע as hapax legomena (as well as the much disputed application of Levitical law for contemporary Christianity), I think the issue of tattoos cannot be definitively answered and therefore becomes a Romans 14 issue. Here, Paul advises that some issues come down to personal conscience.

So if you are convinced that tattoos are acceptable, and you believe that having one will ultimately glorify God, Scripture cannot honestly be used against you. I have preached the gospel to numerous people (including my tattoo artist) as a direct result of my tattoos. Yet I never look down on anybody who is not tattooed.

Conversely, if you are truly convicted that God does not want you to be tattooed, or it goes against your conscience, that’s great. Be obedient to God in that and remain tattoo-free. Yet as Paul says in Romans 14, do not use your conscience as the magisterial authority by which you judge other Christians.

Haydn Lea is an Associate Pastor in Queensland, and is currently studying his Master of Arts (Theology). He has been a member of the Royal Australian Air Force since 2007, and is now training to be an Air Force Chaplain. He is married to Shamsa Lea, is the father of Amira, and loves boxing and studying Theology. If you were interested, Haydn has a Chi-Rho and the defeat of Satan (Revelation 12) on his left arm, and a tattoo devoted to both Shamsa and Jesus on His chest.